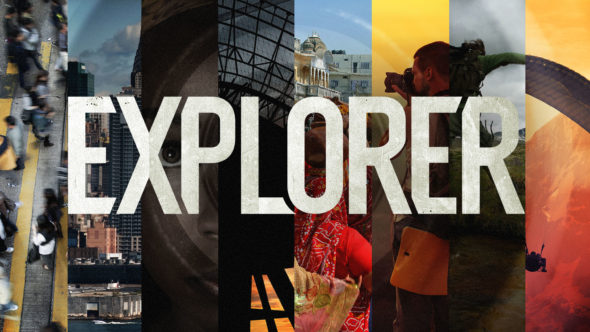 The long-running docuseries will feature a new host, Phil Keoghan, and offer digital content from ongoing expeditions in real-time.

Season 11 of Explorer is set to premiere on National Geographic Channel this fall. Read more info below:

(WASHINGTON, D.C. / NEW YORK – APRIL 18, 2018) National Geographic announced today that the longest-running documentary series on television, the critically acclaimed EXPLORER, will return in fall 2018 as a central part of the National Geographic multiplatform universe. EXPLORER, from National Geographic Studios, will exist across platforms with the launch of “Open Explorer,” an online field journal for explorers and scientists to document their expeditions in real-time, National Geographic magazine content that will be brought to life through the series, original weekly digital and social extensions as well as series extensions and one-of-a-kind NatGeo Live! events across the country. With Phil Keoghan, the Emmy award-winning TV personality on board as the new host, the upcoming season of EXPLORER — with 20 all-new episodes — will continue the series’ longstanding mission to deepen viewers’ understanding of the world through complex, compelling and provocative storytelling. The new season, currently in production, will premiere on National Geographic in 172 countries and 43 languages.

As part of the EXPLORER franchise, National Geographic has launched Open Explorer, a community platform for explorers and scientists to document their expeditions in real time from the field and share their journeys with the world through digital storytelling. Anyone with a story to tell or a place to explore can now share his/her journey and crowdfund his/her fieldwork – university researchers, citizen scientists, students and professional explorers. Users can document their work, upload photos and videos, leverage fundraising tools and collaborate with fellow expedition members. Audiences can follow expeditions for regular updates from the field and can engage on posts through comments and sharing material on social. The online platform aims to democratize exploration by lowering the barrier of entry, giving access and allowing anyone to share his/her stories of curiosity and adventure.

For the last 130 years, exploration has been intrinsic to each issue of National Geographic magazine. In addition to its original stories, EXPLORER also collaborated with National Geographic Magazine and its writers to develop features into segments on the show. The magazine will also feature more adventure pieces that allow the reader to journey, free of boundaries, and investigate the great mysteries of life. New elements include “Atlas,” a story told through maps, and “Through the Lens,” the backstory of a single memorable photograph.

explore as well as online discussions about topics presented in the show, EXPLORER will be a rich source of content and information on all screens. Bringing correspondents and featured explorers from the field and into your world, this season of EXPLORER will also kick off into NatGeo Live! events around the country, giving our audiences an up-close and personal perspective on the expeditions featured on the show.

“EXPLORER has been informing and entertaining audiences for over 30 years, taking them on exciting adventures around the world,” says Tim Pastore, president, original programming & production, National Geographic. “By expanding EXPLORER across National Geographic’s multiplatforms, we will bring the spirit of this award-winning series to our audiences in new ways and will give them more tools to explore their curiosities than ever before.”

The new season of EXPLORER will transport viewers to different parts of the world. The show follows Keoghan as he treks into far-flung regions to meet with National Geographic Explorers on the front lines of groundbreaking scientific, technological and historical discoveries. The all-new 20-episode season of EXPLORER will feature impact-filled documentary stories that will cover a variety of topics. This season’s correspondents include Francesca Fiorentini, journalist, comedy writer and host/producer of AJ+; Ryan Duffy, journalist/producer who has scaled empty highrises in China’s Ghost Towns, gotten shot on the outskirts of Bogota in a bulletproof coat and traveled to North Korea with Dennis Rodman; Mariana van Zeller, award-winning journalist and co-founder of MUCK Media, who is fluent in Portuguese, English, Spanish, Italian and French; J.J. Kelley is an Emmy-nominated filmmaker and explorer focusing on wildlife conservation, exploration and wildlife crime he has paddled from Alaska to Seattle and the full length of India’s Ganges river. Jago Cooper, a British archaeologist, National Geographic Explorer and the curator of the Americas at the British Museum; Cara Santa Maria, an Emmy- and Knight Foundation Award-winning journalist, science communicator, television personality, producer and podcaster; Sal Masekela, a commentator, journalist, musician, producer and co-founder of Stoked Mentoring, a nonprofit action sports organization for at-risk youth; Gaelareh Darabi, a multiplatform journalist and documentary filmmaker; Albert Lin, whose innovations have led to dozens of academic publications, two tech startups and requested briefings from the Pentagon, and who serves as an advisor to the Harvard Business School’s Digital Initiative and is a National Geographic Explorer; and Tim Samuels, an award-winning documentary filmmaker, broadcaster, author — and one of the most distinctive and acclaimed journalists in the business.

Launched in 1985, before National Geographic Channel existed, EXPLORER has encapsulated more than 2,000 films and has been honored with nearly 60 Emmys and hundreds of other awards. The series has taken viewers to more than 120 countries, has opened a window on hidden parts of the world, has unlocked mysteries both ancient and modern, and has investigated stories of science, nature and culture. Emboldened by the highly respected yellow border, the series’ hallmark has incredible inside access to some of the world’s most exclusive, dangerous or unbelievable people and places.

What do you think? Do you watch Explorer? Are you glad it’s coming back?