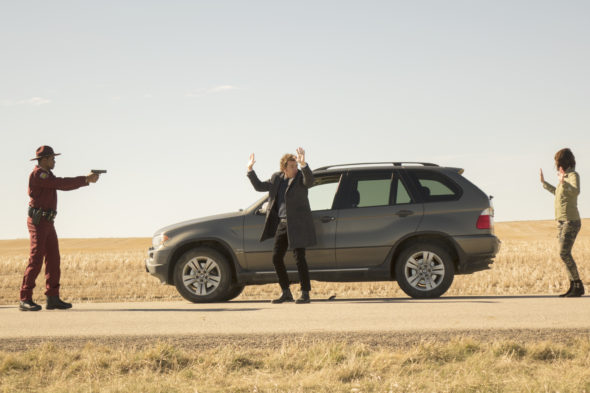 Are you ready for another ride on the Fargo merry-go-round? FX Networks CEO John Landgraf hopes the fourth season of the Fargo TV series will debut in 2019. Although there has been no official renewal, Landgraf has made no secret of the fact that FX wants another season. At first, showrunner Noah Hawley sounded uncertain that it would happen, but later clarified that the media shouldn’t report the series would end with season three, which aired on FX between April and June of 2017.

“Fargo is not gone,” FX boss John Landgraf assured during the network’s winter TCA executive session this morning in Pasadena

The CEO said creator Noah Hawley “has an idea which excites me enormously for a fourth cycle. The plan is to have that ready for 2019. I’m focused on what will come in 2018, but our anticipation is that there’s another cycle in 2019.”

Landgraf said that he has spoken with series creator Noah Hawley and that Hawley has an idea for a new installment of the critically-acclaimed show. But given Hawley’s busy schedule, which includes working on a Doctor Doom movie, the new season would likely not air until next year. In addition, Hawley’s “Legion” will return to FX for a second season later this year. Back in the summer, Landgraf said he had not yet heard an idea for the fourth season.

There’s no news yet, as to what year Fargo season four will be set in, or who will star. When we know more, you will, too.

What do you think? Are you a fan of the Fargo TV series? Do you plan to tune in for season four, when it premieres on FX? Let us know, below.

Bring us season four. This series is unique and unpredictable. Carrie Coon was great…bring her back as well.

Ewan MacGregor was robbed! He deserved the Emmy for best actor, he was playing 2 roles. I had no clue at first! The makeup artist on fargo should have won as well for ssn 3!
Seasons 1 and 3 were fantastic!

Thumbs up for more Fargo!