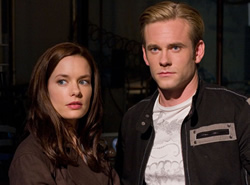 The latest TV series to be based on the classic comic strip Flash Gordon has gone where many sci-fi series have gone before — the cancellation galaxy. It turns out that Flash’s greatest nemesis this time around wasn’t Ming the Merciless but a lack of viewers.

The series debuted on August 10, 2007 on Sci Fi. It was the latest series based on the intergalactic hero’s exploits and stars Eric Johnson (Smallville) and Gina Holden (Blood Ties). Though many science fiction fans were looking forward to the series, most reviews were pretty negative. The producers took the criticisms to heart and worked on improving storylines and adding more Mongo action.

Sci Fi has been quiet on the subject of the show’s fate though, based on the show’s ratings, a second season hasn’t realistically been expected. As time’s gone on, it’s become apparent that Flash won’t be back to save the world next fall.

At Sci Fi’s recent upfront presentation, Sci Fi president David Howe briefly talked about Flash Gordon. He spoke about it in the past-tense and coupled it with previously cancelled series like The Dresden Files and Painkiller Jane. He feels that the series wasn’t developed enough and said that Sci Fi may try again in a few years — with a fresh take and a bigger budget.

Gina Holden, the actress who plays Flash’s girlfriend Dale Arden, was recently interviewed on The Doctor and Mrs Who show. Though the series does have its fans, the actress doesn’t hold out much hope for a resurrection campaign being effective. She said, “I think every effort that people make is great but really, unfortunately, it comes down to studio. And I think once they make their mind up, that’s it. That doesn’t mean that I’m not believing but, it’s a tough call. I would just say, enjoy the moment, enjoy what we did do.” Stay tuned!

sorry to tell you dude but its toast.

That link you posted is to a bitorrent site and the poster says its a joke at the end of the page. besides the article’s all wrong. the guy who wrte it got confused between the superhero flash and flash gordon. flash gordon has never had super speed powers.

Is it really canceled because apprently the exec. producer is acting like it isn’t. This was posted on EZTV May 07, 2008. Look here. http://www.eztv.it/index.php?main=tvnews&show_news=1971 TV Series Finale is the only site that I have seen that is saying that is canceled and I can’t find confirmation anywhere else. I hope it isn’t canceled because I did enjoy the show. It had it’s problems but it was getting better and the problems were fixable. It should be given at least one more season especially with the way the 1st season eneded. As a fan of the show I hope there… Read more »

This completely stinks. But somehow, I knew it would happen. This show was too good, too clean, to be left on tv. Didn’t have profanity and nudity in it. XP

The SCI-FI Channel is getting worse the main problem is that last year (2007), SCI-FI Channels owner (NBC A.K.A.: NBC Universal) merge with another network called the Oxygen network. check it out

That’s probably the reason why Flash Gorden along with other T.V. shows like The Dresden Files and Painkiller Jane were cancelled.

Because of Flash Gordon, I started to watch other shows on SciFi. Now they have cancelled the reason I was drawn to the channel in the first place. Bad move. Bad bad move

This really does suck. I was really looking forward to a second season. I would really like to see what they replace it with. All I see is no reason to watch Sci-Fi anymore with Flash and BSG gone!

I enjoyed Flash Gordon, and was anticipating the next season – seeing if this new government could hold up its promises, what trouble Ming would stir up, if Rankol was truly on the good side, and how Flash & company would find a way home. In fact, although it was Flash Gordon that got me hooked onto SG Atlantis, I was more interested in Flash even though I knew there was a much smaller following. When I found out that it was canceled, I was upset, to say the least.

i just finished the last episode (i work alot) and was hoping for news of a new season. sadly, once again a new show doesn’t get a chance. would it have been better to have a bigger budget with more effects, sure… but then it’d get canceled because it’s too expensive (like the beloved BSG)

The previous film (30 years ago!), had a great score by Queen, was colorful, graphically loyal to the comic books (though quite cheesy) but was far better than this “home made video-like” rendition of the hero.

Instead of picking up new crap from other places, I wonder why SciFi doesn’t pick up series like “Journeyman”, “DayBreak”, “Invasion” and other great scifi shows which had a fan base already established but were cancelled because of bad scheduling/time spot or running agains others like American Idol, CSI and other TV blockbusters.

man this sux. i really liked Flash and was interested in how a possible season two would have gone with them being stuck on Mongo and Ming’s son Terak taking over… oh well. anyone know if it’ll be out on DVD?

I agree with Vinny, Sci-Fi is getting bad at not giving shows a chance to develop. I especially enjoyed the season (series) finale. I was looking forward to next season but now the decision has been made. What’s funny, after Battlestar Galactica, I will have no reason to watch the Sci-Fi channel since they have nothing interesting to watch and they do not give shows a chance.

Episodes are NOT “entitled” to anything; they are simply “titled.” Just because the word has been misused so much by so many that it is becoming “acceptable” by some dictionaries, that doesn’t make it correct!

Editor: Merriam-Webster lists the first definition of “entitle” as “to give a title to : designate” though I see your point. Thanks for the note.

the sci-fi channel is getting worse than the networks when it comes to giving new shows a chance, the fans of there programming watch because the newtorks has abandoned these kind of shows and there fan base. what ever happen to giving shows a chance to find there audience. stop trying to compete with the “BIG” networks they are not your rivals, your rivals are the speciality networks like yourself.