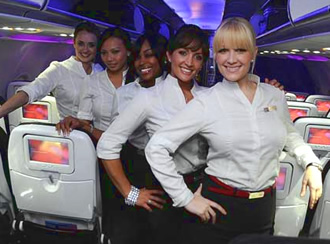 The CW recently debuted a new reality show that revolves around a group of female airline employees. But is Fly Girls living up to expectations or in a nose dive?

The series debuted on March 24th with a tiny 0.4 rating in the 18-49 demographic and just 1.16 million viewers. In subsequent weeks, the demo numbers haven’t gone any lower (could they?) but the general viewers have dropped as low as 0.9 million.

While the ratings for Fly Girls aren’t getting any worse, it’s hard to imagine that they could get much worse or that the CW programmers would consider bringing this series back for another season.

On the positive side, the network only has three episodes left so they’ll surely air them all.

But, what do you think? Are people missing the boat on Fly Girls? Is it worth watching or should it fly away? Cancel or keep it?

This show has the snottiest, most stuck up and conceited women “playing” flight attendants, with the exception of Farrah whom I believe to be real and honest. For a real airline like Virgin America to have such negative and detrimental representation of its employees I can’t believe they didn’t cancel it themselves after the very first episode. This is NOT the type of show you want a younger, female audience to be viewing with all the bickering and fighting and back stabbing between the girls the last thing we need to show kids is how immature these women are when… Read more »

I fell in love with the Fly Girls reality tv show. They brought life to those who can not travel around the world.

I absolutely love Fly Girls! It’s a good show, I enjoy watching it every week and I really hope they don’t cancel it!

I Loved the show. Please bring it back!!!!

great up and coming show keep it!

Ok, so the CW got rid of The Game, which was such a great show, to aire scripted, fake ladies, who do not in any way represent the majority of PROFESSIONAL Flight Attendant..oh I get it, CW is chaneling the hills, well if you do, find stripers or other non professional for a show like that and stop stereotyping young flight attendant, we are not all air heads, man hungry, sex hunting, fame wanting, bimbos…

sounds like youre bitter and want to be on youre own tv show. be happy for others gosh,the show does not stereo type us as flight attendants , where and when did the show say flight attendants are only cute ladys. the show is a great way for folks to see how we are in one city then the next. i give a thumbs up and will love to see whats next for the girls.

This show is just not good.the women are gorgeous but the show just misses the mark.I like the show Airline that aired on A&E years ago about flight attendants dealing with a variety of different and sometimes difficult passengers.It lasted 2 seasons and was 10x better than this show.i wished i liked this program because the women are smoking hot but its not enough to take away 30 minutes of my life.There has to be better pilots out there than this in the CW fold I hope.Holla!!!!!!

keeep it! i love this show! it has a great variety of people! and enough drama for everyone to enjoy! its new and different!

I actually enjoy the show! The drama is really starting up now – I can’t wait to see what happens next.

I watched it. Sort of like a train-wreck, I was unable to look away. Not because it was so good, but because it was so obviously script fed that I couldn’t believe from week to week that any 5 women in the country would willingly subject themselves to such a farce!

I still cannot believe they canceled The Game for this crap! This show is SOOOO BORING…

PLEASE cancel this show . The Game, Gilmore Girls, were much better shows then this. Who ever agreed to air it should be drug tested.

Fly Girls have good looking women but 1 episode is all i need.They cancelled a funny and witty show like The Game and rolled this crap out it purely ridiculous

I’ve never seen Fly Girls, but they could probably be showing better things at that time.

The CW is fighting to attract the young female demo, competing with the larger nets plus local stations who offer shows to that same demo. By putting all their eggs in that one demo basket, the CW is committing suicide. They MUST diversify if they’re to survive. And long as Dawn Ostroff is prog director, they won’t diversify. She’s already made some colossal blunders by letting go of their most-watched prog, that wrestling show, “Smackdown”, and by dumping the somewhat higher-rated “Gilmore Girls” in favor of the low-rated “Veronica Mars”. And by offering trash like “Fly Girls”, she & nthe… Read more »