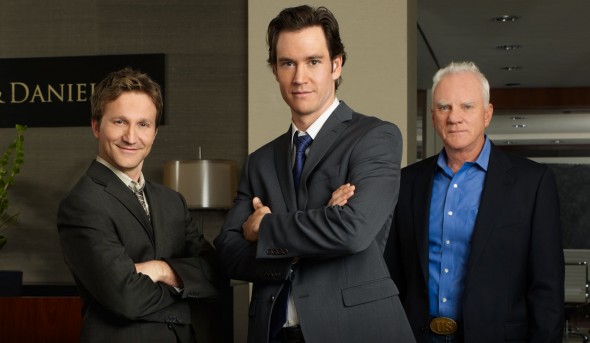 It’s case closed for Franklin & Bash. The TNT buddy-legal series has been cancelled bt the cable channel after four seasons and 40 episodes.

For whatever reason, the series was way down in season four, averaging 1.16 million viewers and a 0.3 rating in the 18-49 demographic. That was down more than 45% when compared to season three’s ratings (which were also way down).

In addition, Turner Broadcasting President David Levy has said that the cable channel is now focusing on airing more “edgy” shows — like Legends and Public Morals.

The fourth season finale aired on October 22nd and will end up being the show’s series finale as well.

What do you think? Did you like Franklin & Bash on TNT? Why do you think the ratings fell so dramatically? Do you think it should have been cancelled or renewed for a fifth season? Would you watch it on another channel?

My husband & I loved this show and cannot believe it was ever cancelled! I give the show a thumbs up and wish they would bring it back!

I loved the show and wish they would have at least given them a season 5 to finish all the story lines.

franklin and bash – very good show – good fun – should bring it back any channel.

I LOVE Franklin and Bash. It’s my favorite show ever. I would really like to see more of it on comedy central or any other channel for that matter, just PLEASE!!! Bring back Franklin and Bash! It might be a comedy, but it sure as hell inspired me.

Franklin & Bash is the best show ever, the funniest and incredibly awesome.. I might even study Law after I graduate from my business course. I am hoping for a 5th season and more celebs to be on it, like “The Rock” or Kevin Hart, or Scarlett Johansson. I also hope to be on it. However the cast of “Saved By The Bell” should also be on it with Jimmy Fallon

I really loved this show. These guys were great together. It was funny and uplifting….Not sure why some shows make it and some do not. This is one that should have made it…BRING IT BACK!! 3 of my shows cancelled all on TNT, hmmmmmm seems odd to me. Move them (Franklin & Bash, Dallas, Perception)….they would make elsewhere!

Loved the show!! They would get a much better rating if tnt stopped running it in such horrible time slots. They keep the crap shows and give them the primetime. I would watch this on any channel or as a netflix/hulu series. Hopefully the idiots in charge will wake up before they cancel all the good shows and we are left with the shows for idiots (big brother, survivor, housewives of wherever, almost any “reality tv show”)

I would absolutely watch Franklin and Bash on another channel. So disappointed it was cancelled!!!! Please bring it back!!!

so bummed. Just saw that this was cancelled. I loved that show!!

Love the show would love to see another season!

Not that it makes any difference but I really loved the show, too. Unfortunately even if this comments section received a million comments it wouldn’t make a difference (since that’s apparently what the view rating was for season 4).

yessssssssssssssssss i would watch this over and over again the way , jared and peter bring twist to the courtrooms is so amazing and enthusiastic. JUst bring it back on anything i really love this show.