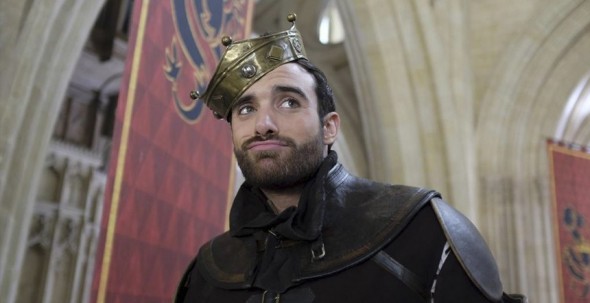 Speaking at the TCA winter press tour, Lee said Galavant was “an adorable show” and “the execution of the second season is really strong.” Season two picks up with dashing hero Galavant (Joshua Sasse) trying to get back together with his true love, Isabella (Karen David). Timothy Omundson, Vinnie Jones, and Mallory Jansen also star.

Lee also mentioned that the musical series could have a future on Broadway.

What do you think? Are you watching season two? Would you see Galavant on Broadway?

Galavant is my FAVORITE show! It is clever, beautifully-done, and so original – nothing like it on TV. Please bring it back for a third season!

If you would like to see your favourite show on Hulu, take a look at the #MoreGalavant campaign – you can join in too!

Please RENEW!! This is a super fun show that everyone in the family can watch together. My girls get up and dance when a song comes on. I giggle at the hidden adult jokes. Great TV show. Please keep!!

Check out the #MoreGalavant campaign – fans are trying to get Hulu to pick Galavant up for a third season, with the support of Karen David (Princess Isabella) and Tim Omundson (King Richard). http://www.examiner.com/article/galavant-scoop-abc-cancels-beloved-comedy-but-there-s-hope-for-moregalavant

Oh, please renew for season 3, love it, laugh, music is fun, sarcasm is great. Please, please renew the only show I actually wait all week to watch

Hi Leslie…if you would like to join in on the #MoreGalavant campaign, to get Hulu to pick up the show for a third season, here’s how: http://www.examiner.com/article/galavant-scoop-abc-cancels-beloved-comedy-but-there-s-hope-for-moregalavant

Fantastic show. Hope for season 3. One of the most original and hysterical shows on TV

GALAVANT is the best show on TV!

Love it! A must watch every Sunday!!!

This is a great show, I think it’s fun, funny, and the actors and music are top-notch!

I love this show. Tons.

I understand that Galavant isn’t for everyone. But I hope that those who don’t enjoy it can still appreciate how much the fanbase adores this show.

Sorry to see we’re so few in numbers, but hopefully our passion for Galavant is enough to keep it alive for another season!

Please bring it back for season three

Six seasons and a movie!

I love the show it is refreshing , light humus funny , it is nice to see this type of comedy on TV . I don’t know why everyone isn’t watching it.