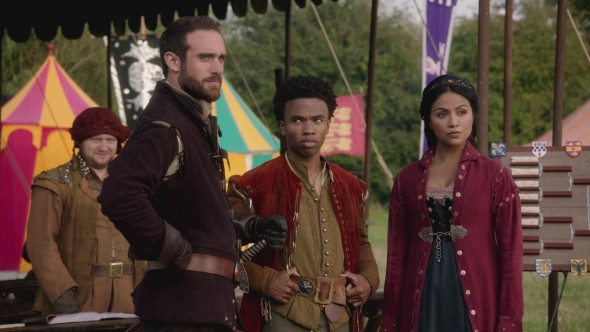 Despite having some awful ratings, ABC has renewed their fairy-tale musical comedy series Galavant for a second season.

Galavant is a unique series however and adds some variety to ABC’s schedule. With another limited run expected, that would seem to be a major reason for the show’s second season renewal.

What do you think? Do you like the Galavant TV series? Are you glad that it’s been renewed for a second season or, do you think it should have been cancelled instead?

When Madalena poof herself in front of Garth it was so freakn funny I actually spit water.

Love the show. Nice to see other than murder shows. Keep it going

Galavant is such a good show! What a breath of fresh air, comedy, and music. Keep it going, please! We need it!

Galavant is groundbreaking and lighthearted in a far too serious world! Keep it going!

“GALAVANT” is one of the best new shows on t.v.. It kicks “Glee’s” assign every way because at least their stuff is original. ABC NEEDS to bring it back for a 3rd season. In a world of ridiculous, unoriginal remakes, reboots and crappy reality shows, “Galavant” is a breath of fresh air.

I love this show and am soooo happy it has been renewed. Let’s get more people interested in this. Don’t let it be lost in the shuffle. Far too many crappy shows are kept on when they should be off. This is great show!

I love this show, funny and music was so happy that it was renewed, yea!

Loved it! So glad that season 2 will be coming soon!

It was surely a refreshing diversion from the too many shows that, with disappointment and bordom, mirror each other. I’m looking forward to season two with eager interest.

I thought it was terrific; kind of corny at times but a fresh reprieve from some of the other crap on tv right now! Looking forward to Season 2!