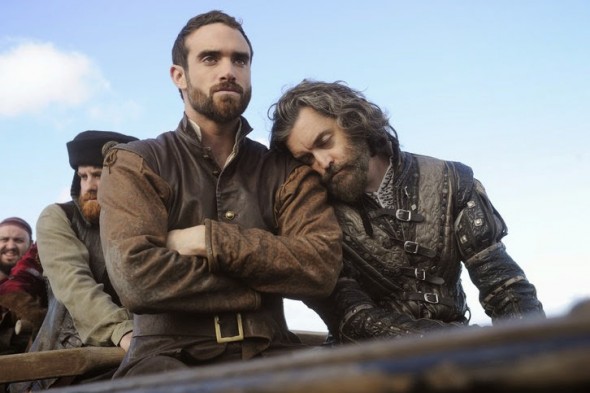 ABC recently unveiled something a bit different — a fairy-tale style musical comedy called Galavant. How’s it been doing in the ratings? Is the series a big success or is it hitting sour notes? Will it be cancelled or renewed for a second season?

The network decided to air the Galavant’s eight half-hour episodes over the course of four weeks, to help fill the gap left by Once Upon a Time while that fairy tale show is on hiatus.

The first pair of episodes of Galavant debuted on January 4th and drew a 2.0 rating in the 18-49 demographic with 7.42 million viewers. It was an okay debut in terms of the ratings. It wasn’t a hit but the numbers were on par with Once’s more recent ratings — and they were certainly far better than anything else ABC was airing that night.

In week two, the ratings took a big tumble, falling to a 1.3 in the demo and 4.11 million viewers — likely in part due to the fact that NBC was airing the Golden Globes. The numbers for tonight’s episodes will probably be as bad or worse since they’re airing opposite the AFC Championship game on CBS.

Galavant’s ratings certainly haven’t been anything to crow about but ABC entertainment chief Paul Lee reportedly really likes the program. It’s a compatible time-slot filler for Once, the show was featured at the TCA winter press tour, and Lee noted that, “If Galavant does well over time, you can imagine how much fun the company can have with that.”

Still, while ABC could order a second season of Galavant (series creator Dan Fogelman has teased that the first season ends with cliffhangers), it doesn’t seem very likely based on the ratings.

But, what do you think? Would you like to see Galavant return for a second season or do you think this musical comedy should be cancelled instead?

Ok abc i have gone through about twenty pages od coments and im not seeing any nagativty towards this show at all a lilttle doging on once upon a time which is unnecessary but oterwise nothing but love so if u dont bring it back then i. Shall lose all faith in the world because the network tv business obviously has no one smart left and children are the future and most of them learn from tv will all be doomed so pleas for the sake of the world bring it back and dont call me a drama queen cuz… Read more »

My kids really liked galavant ,in fact they loved it . I really hope that it comes back. please please please

I really enjoyed it. I hope it returns.

Keep the show! It is about time that a network produces something a bit different. This is a smartly written program and has real potential to break new ground.

Bring galavant back I loved it!!!

I love watching Galavant. Please bring the show back. Thanks!

We love Gallavant. Luke Youngblood is my favorite. Love the writing, concept and cast.

Bring it back! I loved it! Original tv and the music was fantastic. It made me laugh every week!

PLEEASE!! Renew! Funniest show on TV in years. I thought it was hilarious!

Renew this show please! Galavant is origin, funny and never fails to entertain. The music is great!

Yes bring it back!!!