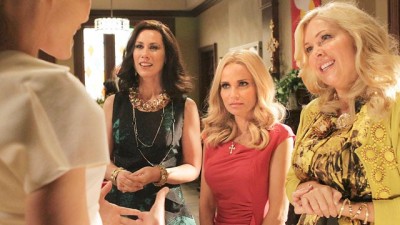 Did Carlene finally take down Amanda? We’ll never know. ABC has cancelled GCB after one short season of 10 episodes. There won’t be a “second coming” or a second season for this show.

This dramedy debuted to a 2.2 rating in the 18-49 demograpic with 7.56 million viewers. That wasn’t a great showing but it was far better than what ABC had been getting with Pan Am earlier in the season.

Most shows see their ratings decline in week two but GCB’s actually grew, a sign that there was some positive word of mouth helping the series.

Over the course of the show’s short season, the numbers fluctuated a bit but it ended up averaging a 1.9 rating in the 18-49 demographic with 5.87 million viewers. On our ABC Ratings Report Card, which measures the relative demo performance of shows on the network, GCB had a “C-” grade.

It was firmly “on the bubble” between a cancellation and a renewal but ABC ultimately decided to cancel it. A slightly-better rated bubble show, Scandal was renewed. If that new Shonda Rhimes series had done a bit worse, GCB might have been renewed.

As it is, GCB has been cancelled. Some Christians and organizations objected to the show as they felt the original title was demeaning to Christians. Some called for boycotts but its difficult to know if that had any impact on the ratings or the network.

The last episode of GCB aired on May 6th. It wasn’t intended as a series finale so some ongoing storylines were left unresolved.

What do you think? Are you sorry to hear that GCB has been cancelled and won’t be returning for season two? Do you think the show was demeaning to all Christians? Do you think the objections had an impact on ABC’s decision to cancel it?

Well I am disappointed to find this out! I loved this show! It made me laugh.

it’s a shame… it was actually one of the greatest shows I have seen that kept me interested into keep watching….

I know this is extremely late, but do to my lack of paying attention to these things, I am just finding out that GCB was canceled!! What in the world are they thinking over there? I was looking forward to what was next. I loved how the girls came together at the BBQ. It was awesome! I looke forward to cathing up every week. Please bring it back, I beg of you!

I was sad to hear that the show was cancelled, I so hate it when I get so caught up with an awesome show, and bang the show is cut off.

so sorry this show was cancelled! It was so much fun. This was so meant to be fun! Get rid of your reality shows (which by the way, are NOT real) and put on some fun entertaining primetime TV shows Please!

Sorry the series was cancelled. I liked it as I am sure it
depicted the sassy lives of women in Texas.

I hope another network will pick it up! I love this show!! soo very funny!

I think it was a joke to cancel the second season all because of people feeling offended. We are goin to end up with shows that people will not end up watching because show ratings are not about everyone agreeing about everything there has to be differences in tv shows and if people don’t want to see them, they know where the remote is!! I really wish there was a second season regardless of what people thought because I thought it was great

Is there anyway another network could pick up GCB? I loved this show! Sad to see it go 🙁

I can’t believe it has been not been renewed it was hands down the best new series on T.V. it is so southern women..lol please please reconsider bringing it back was so worth my Sunday nights

SOOOO disappointed GCB is not renewed! We just were able to view it on Hulu for the first time and love, love the show! Never have I written about a show or liked a show as I do GCB! Very sad!

I liked the show. I’m totaly surprised to hear that it was cancelled. ABC needs to bring it back!

I loved this show!! I am so disappointed to hear it was cancelled! Bring it back!

I loved this show! I grew up a baptist and it is right on – so funny!! Loved it! Really screwed up with the cancellation

This was way too good to cancel… bring it back!!!!