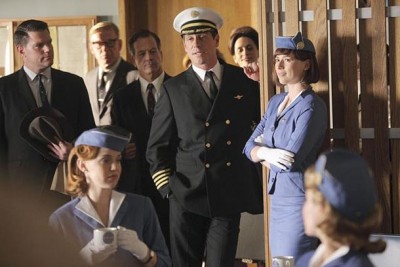 I loved Pan Am when it was first aired and have just watched it again on Netflix – still just as good as I remembered it to be! I have no idea why it got low ratings. Did it clash with something hugely popular being shown at the same time? Great characters, exciting plotlines, glamour and intrigue. So disappointed they never made a finale show at least to tie up loose ends.

So many persons wanting a new season, and still no reply from the producers: wake up !!!

I just binge-watched several episodes and I loved it. BRING IT BACK PLEASE!

People I talked with really liked this show. Hard to believe the ratings weren’t there. Any chance they were not measured properly? Its been years and I still think back to this show.

Same, man, same. I watched it some years ago (when it was available on Netflix, great times huh). I remember thinking it wasn’t too late and maybe Netflix or any other streaming service would pick it up. Guess what? Never happened. I’ve always wondered about the ratings too, I didn’t watch the show on its original air date, but I really cannot see a good and interesting show like this flopping so bad. I’ve always thought it was such a solid show and it deserved so much better. All we have left is the nostalgia, my friend.

I am extremely upset there is no future Pan Am. It was so good. I hope another network picks it up and keeps it going.

I watched now in 2018 and in my opponion this is a great movie/serie. Really great actors and stories Bring it back please !

Wish that season 2 and more would come. Very intriguing show. Absolutely loved it. Praying Netflix, Amazon or someone will pick it up to continue..

I loved this show and I am very disappointed that it has been cancelled..I love that it is a period show, great actors, fun storylines that are different than anything else on tv. Please bring it back!

I have just finished watching all episodes of this Pan Am series and really can’t understand why it would be axed when it was entertaining – fast moving and I think great acting and story line. TV stations often leave crap programs still on air and especially reality shows where I think most brainless people like to watch. Get real ABC lets have a 2nd series its not too late. Other crap programs are still running. To finish as it did was also unprofessional of the station to do this. There was more to tell and show. You’ve stuffed up… Read more »

Please bring it back, it was the best show ever!!!

I like the show so much and don’t understand why it’s been canceled. Great story, beautiful casts, nicely dressed. Please bring the show back!