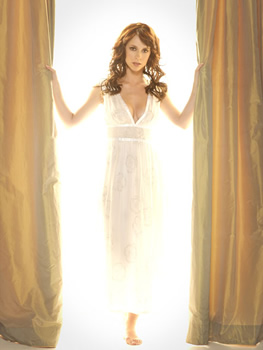 Yes do the shop ABC,it will maybe rectify the fact you cancelled Men In Trees and Ugly Betty on me,why do U people keep cancelling family shows,and keep on the crap,do U really think we care about the Bachelor,get this show pronto,CBS lost,your gain!

PLEASE, PLEASE DON’T LET THIS SHOW GET CANCELED. I HAVE FOLLOWED THE SHOW FROM THE VERY BEGINNING, AND I LOVE ALL THE CHARACTERS. I AM VERY UPSET AND DISAPPOINTED, AND SURPRISED YOU HAVE CANCELED THIS SHOW. PLEASE GET IT BACK ON THE AIR FOR SEASON 6 IN SEPTEMBER.

THE ONLY SHOW I WATCH ON YOUR NETWORK A IS GHOST WHISPERER.

THERE ARE A LOT OF US FOLLOWERS OF THE SHOW, AND I’M SURE OTHERS WILL WRITE IN.

Yes, ABC should pick up Ghost Whisperer. Please pick it up and continue the series.

Ghost Whisperer is a horrible show. I don’t know how it made it beyond 2 episodes.

I think that ABC should pick up Ghost Whisperer.

ABC should save Ghost Whisperer but get rid of the Shadows and Shinys. Go back to just helping ghosts and their families move on.

I don’t think that Ghost Whisperer should be canceled because I recently got interested in the show and I have become hooked. I love it and want the show to come back next season because there is so much suspense that the can’t possibly cram into next week. I would leave all of the addicted viewers like myself without any show to love. Without any characters to love and watch grow answer old questions and pose new ones. That is why I think that the show should return next season.

ABC would be my network of choice if they picked up Ghost Whisperer. Here again another good show gets canceled without an official ending….I’m getting so tired of watching a show after many years to just be canceled. I think a network should have a contract they need to abide by that if a show makes it over 2 years, that a series finally has to be done…This way more people will watch knowing that their favorite show will have an ending…..PLEASE ABC PICK UP GHOST WHISPERER. Personally I do not know why CBS keeps How I met Your Mother….That… Read more »

Please Abc renew the show, give it a proper ending.
Ghost Whisperer has been so good over the last 5 years and deserves a proper ending. Who knows if the ratings may increase if moved to the best network ever ABC!

ABC – pick it up – you dumped Eastwick – which I loved – please pick up Ghost Whisperer.

Yes, of course! Pick up Ghost Whisperer! I mean, it’s no “reality” show (ugh), but it is entertaining. It would be nice to put some new writers (or maybe the old writers), on the job.

I absolutely do think ABC should pick up Ghost Whisperer for a 6th season. It’s such an amazing show, and everyone is going to miss it so much if ABC doesn’t pick it up. In my opinion, Ghost Whisperer is the only show on TV anymore that is even watchable, let alone amazing. The other shows that were cancelled, I can do without, but Ghost Whisperer, I cannot.

please abc save my fav show, it has so many cliff hangers that need tieing up, its such a good show with brillient actors please pick it up x

yes they should i love gw

I would be a loyal viewer if ABC picks up this series as I have for the past 5 years, this show is worth saving and should get another chance.