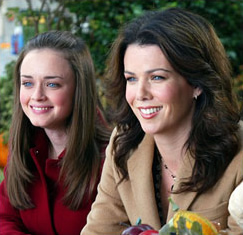 If you’re a fan of Gilmore Girls, the dramatic series that starred Lauren Graham and Alexis Bledel, you might be happy to know that series creator Amy Sherman-Palladino hasn’t given up on her plan to make a movie.

EW’s Michael Ausiello has had a mini (major, actually) obsession over the idea for sometime and recently re-grilled Sherman-Palladino about the possibility.

The show creator, who left the year before the show ended, isn’t happy with the way the series finished in her absence, though she admits she’s never actually watched it either. She says, “I wanted different things for Rory… I wanted her to follow a different sort of path… [go] off on her own adventure, which I guess she sort of did. I haven’t [actually] seen the last season, but I heard about it from other people.”

Sherman-Palladino apparently had different plans for all of the regular characters but is reticent to share the details because she’s still holding out for a movie. She shared, “I don’t want to totally say [what my ideas were], because if there is a movie in the making, I’m going to be basically delving back into where I left off, and then I’m kind of [screwed].”

She also notes that she keeps in touch with Graham and Bledel and is optimistic that a movie could happen at some point. She said, “If I thought it was definitely not going to happen, I would say that…I think that the beauty of Gilmore, and the beauty of family relationship shows is, you never really run out of story. You’re going to battle your family until you’re all in the ground. Those things never resolve, doesn’t matter how much therapy you get. Ten years later, there’s still going to be [material] there to mine and to delve into.”

It, of course, remains to be seen if Graham, Bledel, or the rest of the cast would be interested in returning to Stars Hollow. Graham essentially mocked the idea last Spring when she was interviewed by Jimmy Fallon.

What do you think? Do you think a Gilmore Girls movie will ever actually happen or is it just wishful thinking?

There NEEDS to be a GG movie! Please! Please make a GG movie. My daughter and I would very much appreciate it.

I would so love to see gilmore girls come back on season 8. both my mom and I love the show and whish that gilmore girls well back. I wanted to see with how to rory and lorela and luke are up to.

The ending of this show was obviously unplanned and ill-prepared. Lorelai and Luke should have received a better way of reuniting, one that both the characters and the fans deserve. The wonders of a show like Gilmore Girls are that they put into visuals a complex story that pulls the viewer into its world. I know that I was captivated by the two Lorelais’ lives together, and even by the lives of their friends. What should happen is that Rory ends up with Jess. I’m sorry for any fans of Logan, but Rory and Jess stood out above any of… Read more »

plz let rory and jess, or rory and tristan or even rory and dean get back together ANYTHING BUT RORY AND LOGAN

I think there should be a movie to make us feel sure it is going to be a good ending. I really wanted Rory and Logan to be together but she said no to his proposal. There should at least show Luke and Lorelai in a wedding so they are officially together. There should also have Rory be with a guy to be happy since she broke up a few times. The whole cast worked well together so everyone should be able to have a happy ending in the movie. Some people are still wondering about some characters and what… Read more »

I would camp out to see the Gilmore Movies if one is made. When my sister had cancer and was in the hospital for over a year, my mom did not understand what we were talking about. We started buying the seasons and my mother became a fan. My sister fight over which one of us will name our first daughter Loralei. If there was a city like Stars Hollow, I would so pick up and move. The characters in that town would make life fun.

I really think there should be a movie, I sometimes think it would be interesting to see Rory maybe bump into Tristan and get together with him, could be quite interesting and how about Lorelai and Luke getting married and discovering that Lorelai is infact pregnant with twins like she had in her dream at the beginning of Series 3, that would be fab. Come on give them a decent finale.

I used to adore ASP, but then she just screw with season 6 so she could have what she wanted, she didnt and decide she didnt give a damn anymore and left with a bunch of newbies in the writing room and a mess on the sheets. So really I don’t believe her when she says she cares for the GGs, a movie will just make her want one more and then another, so she will be messing with our lovely girls just the way she did back in 2006. At least right now I already have a happy ending,… Read more »

The new writers did a great job of the last season, but no way is that girl Rory Gilmore a journalist. Her character arc never felt convincing. It would have made much more sense to give her her own adventure, as Sherman-Palladino says in the above interview. Rory needed something to make herself her own person. So go ahead, make the movie, do what you can, the fans in Australian and NZ will be legion but fix the Rory thing – and do something about Luke, he was starting to get a bit on the creepy side.

I agree 110% that there needs to be a proper ending… There def needs to be a wedding for Lorali and Luke! At least a made for TV movie, give us something as dedicated fans that we are!

I still watch the Gilmore girls in re-runs. I want to live in Stars Hollow, have a quick wit, run a charming inn, and be fiercely independent while knowing full well I have seriously wealthy parents who one day will leave me their mansion! Seriously…love all the characters and Amy is a terrific writer. The dialogue is amazing. Mrs. Gilmore and Kirk are classics. Bring on a movie! Big romantic funny movie. Maybe the secret of Mr. Kim can finally be revealed!

please please come on all australia is waiting for a proper ending. Luke and Lorali should get married or something and it is true Rory needs to locate a great guy. Please lets petition somehwere to get the movie done.

To me it seemed like she tried to sabotage the show before she left with how she finished off her final season on the show. That being said I think the writers of the final season had a lot of crap to deal with because of the previous season and I think they did the best they could with what was there to work with. I think a movie is a good idea the whole Luke and Lorali story needs a proper ending and Rory needs to find a decent guy.

Though I was saddened to see the show creator, Amy Sherman-Palladino, leave the show before the last season, I thought that the story seemed wrapped up fairly well. I fell in love with the citizens of Stars Hollow and was sad to see the series end. If Sherman-Palladino believes there are more stories to tell, which I believe there definately are, then I am willing to drive back to the city of Stars Hollow.