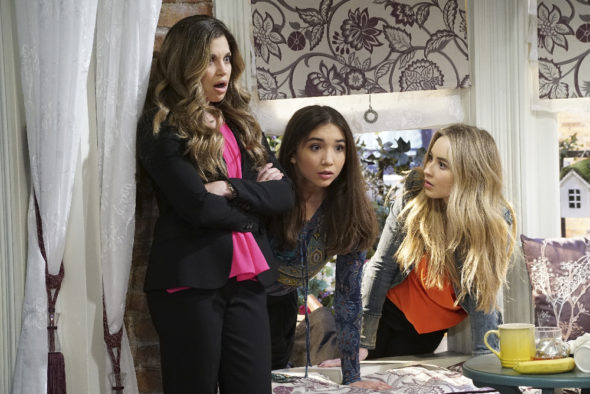 It’s official. Disney Channel has cancelled the Girl Meets World TV show after three seasons. Last week, Boy Meets World co-star Rider Strong, who guest stars on the sequel as Shawn Hunter, indicated on a podcast that Girl Meets World would have no fourth season. Soon thereafter, the comedy’s writers took to their official Twitter account, to reassure fans that Disney Channel had not made an official cancellation or renewal decision.

Now it seems it is those same writers have taken to social media to confirm Girl Meets World will soon come to an end. Check out their tweets, as well as messages from stars Rowan Blanchard and Sabrina Carpenter, and guest star Will Friedle, after the jump. Girl Meets World also stars Ben Savage, Peyton Meyer, August Maturo, Danielle Fishel, and Corey Fogelmanis.

It is with incredible pride in our work and complete sadness that things end, that I report to this wonderful audience that our show is over.

I just officially got the call, and would like to thank this audience for its incredible love and loyalty. Please watch our January episodes.

We leave you with three incredible souvenirs of a show we couldn’t be more proud of. As I look back I can tell you with absolute certainty […]

We gave you our best.

It is with incredible pride in our work and complete sadness that things end, that I report to this wonderful audience that our show is over

I just officially got the call, and would like to thank this audience for its incredible love and loyalty. Please watch our January episodes

We leave you with three incredible souvenirs of a show we couldn't be more proud of. As I look back I can tell you with absolute certainty –

We gave you our best.

Blanchard’s moving response was tweeted as an image file, so we cannot copy and paste the body of the text, but you can expand the image to read it, for yourself. It’s a love letter to the cast and crew, the series itself, and particularly to the audience.

(To enlarge the photo, right click on it and open it in a new tab or window.)

Sabrina Carpenter posted a cast photo and message to Instagram. Check it out.

The last time I had in n out burger and didn't eat it, I had just been cast in a show called girl meets world! Tonight I sit here and I can't eat my in n out burger because life comes full circle. We speak in the language of love, heartbreak, friendship, family, sadness, and laughter. Wherever we are in the world, whatever we believe in, whoever we love, we all speak that language. We had the privilege of growing up in front of your eyes. The privilege of teaching the lessons we were learning ourselves and beyond that. To the family that was created on our set, between the cast and crew, thank you for giving us the ability to make mistakes and to grow. I felt so safe in that bay window. People thought it was weird that I was excited to go to work. People thought it was weird that we really did and still do love each other. That's a rare entity, we hold that tight. Thank you Disney for giving this show and these characters the chance to see the light of day. I know I feel very lucky to have given life to Maya hart. MJ- without you I wouldn't know most of what I do. I also probably would have never had 2 paint fights in my lifetime. We live in an intricate world. We can be adversaries whilst being allies. To everyone that watched our show and felt something, thank you. To everyone that grew up watching Boy Meets World and decided to give our story for a new generation a chance, thank you. And to the little girls reading this, You can do whatever you put your mind to. You're gonna meet the world now, and I think you'll love it. "There is no end. There is no beginning. There is only the infinite passion of life." – Fellini

Will Friedle Salutes the Cast and Crew of Girl Meets World

Will Friedle, who originated the Eric Matthews character on Boy Meets World and reprised the role on the sequel series, saluted his colleagues on Twitter, writing, “I tip my glass to the cast and crew of GMW. You did us proud. I love you all.”

I tip my glass to the cast and crew of GMW. You did us proud. I love you all. https://t.co/VSh4iniLy6

What do you think? Is the Girl Meets World TV show ending at the right time, or should Disney Channel have renewed it for a fourth season? Let us know, below.

I wish they would have kept it going! They did a great job! Just when you’re getting invested in the characters it ends.., that’s not fair.. reboot please!

Disney is crazy for canceling shows Hannah Montana suite life of Zack and Cody and suit life on deck Jessie girls meets would I know I will never watch Disney again all the good shows are gone why watch. Anymore

Disney cancels shows after any single “main-ish” character turns 18. I’m guessing they have a reason for it, but I really wish they had something officially set up between Disney and nickelodeon or some other channel because Disney is the only channel I know of with an age cut off for actors.

Those show were except Girl Meets World were NOT cancelled, they ended.

I think that Girl meets world should have been renewed for another season because it teaches kids how to be brave and honest and life lessons . It is my favorite show ! I wish kids would be able to fight for the show . I love the cast and the show!

I wish this show would continue. It shows emotions and situations that are real to kids. Good morals, unlike many of the other shows. My kids and I watch all the episodes. Very sad to see it ending.

No great loss. Girl meets world was just as DORKY as Boy Meets World thankfully we didn’t suffer it as long as BMW.

How about seeing if Netflix or Hulu will pick it up. I thought Disney was the wrong network to have the show anyway

we as a family love this show! why cancel a good show 🙁

I’m sorry your show was cancelled, Stephan. Thank you for reading and for your comment.

I understand I that show to

This is ridiculous! This show is so true and relateable to teens facing the same situation all over the world. My kids have grown into mature young adults with the help of this show. This show gives them the advice that i can’t. Like the secret of life, people change people, before this show I myself, didn’t know the secret of life my kids told it to me. This is more than just a show this is a guidence and a reassurance that kids everywhere even in tv face the same struggles and they are not alone. Cancelling this show… Read more »

I’m sorry, Marie. It always stinks when a beloved show is cancelled. I hope your family finds something else worthy. Thanks for reading and commenting.