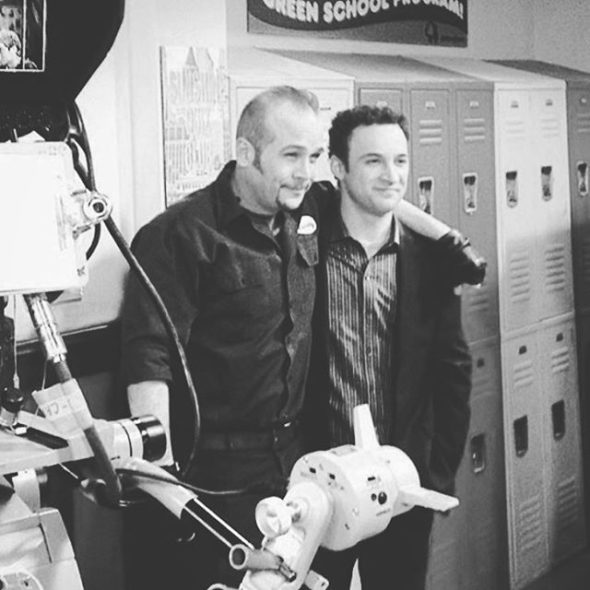 When the Girl Meets World season three and TV series finale aired on Disney Channel on January 20th, it was chock full of original Boy Meets World TV show stars, too. That said, the goodbye scene for one vet — who has appeared on both cancelled series — ending up on the cutting room floor. Now Danny McNulty, who played Harvey “Harley” Keiner, is sharing that moment from the script as well as additional Girl Meets World memories. Check it out, after the jump.

To be clear, McNulty was in the final episode of the Disney Channel sitcom, it was his farewell that was cut, most probably due to time concerns.

The actor posted videos and photos from this cancelled comedy, as well, with appeals for Hulu or Amazon to pick it up for a fourth season.

Memories are made of these ❤️️

When I first met #BenSavage he was just a boy meeting the World for the first time… It was a real honor to get get a chance to work with him again and see what a great man he turned out to be !!! May you continue to meet the World with a smile on your face and a happy song in your heart 🍀🌎💚🌍🍀 #hulusavegmw #gmwseason4weneedmore #planes4gmw

In addition, McNulty shouted out to Danielle Fishel and shared a photo of the two of them.

Thanks for being so kind to me Topanga!!! I know that whatever the future has in store for @DanielleFishel it will be surrounded in greatness because she's got a heart of gold !!! 🌎💛🌏 #hulusaveGMW #amazonsaveGMW #planes4gmw

Finally, he thanked all the Girls Meets World fans for making the three season series possible. McNulty also made sure to express his gratitude to the writers.

I want to take a moment to thank all of U the fans of #GirlMeetsWorld 🌎❤️️🌏 without you none of this could have been possible ‼️ Thank You #GirlMeetsWorldWriters for giving #HarleyKeiner a chance to be a part of such a wonderful World ‼️ Until we meet again,,, try and make good decisions, dream & try to do good ❤️ #HuluSaveGMW #GirlMeetsGoodbye

What do you think? Do you think another network or streaming platform will renew Girl Meets World for season four, or will it remain cancelled?

Unfortunately this will remain canceled.
Not enough sex, or Violence and swearing for Hulu to pick it up .