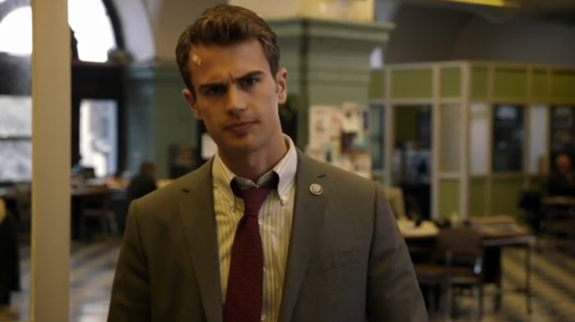 Officer Walter Clark’s story has been cut short. CBS has cancelled Golden Boy after one season and 13 episodes.

The network was hoping that Golden Boy would perform better than Vegas — and for awhile, it looked like it might. Unfortunately, Golden Boy’s ratings ended up being pretty bad, particularly in the 18-49 demographic.

The episodes that have aired so far have averaged a 1.4 in the demo with 8.3 million total viewers. It’s one of the lowest-rated shows on the network.

The last episode, titled “Next Question,” will air next Tuesday night.

What do you think? Are you sorry to hear that Golden Boy has been cancelled? What would you have liked to see in season two?

Well…CBS is as predictable as all the other nitwit networks..finally an adult themed show for people with some intellegence to enjoy and look forward to and they’re concerned about the 18-49 age group???????Don’t they have all those assinine shows that cater to THAT age group on constantly…what’s next… cancel ncis???? great decisions by the pinheads!!!!!!!!!!!!!!!!!!!!

My wife and I are totally disappointed that this show was not renewed. You are making a big mistake CBS for there is a much bigger viewing audience than the 18-49 demographic you are suggesting. We thought it was one of the more realistic shows on t.v. today and not all the hollywood B.S. If CBS would like to be number one they should probably bring ” Golden Boy” back.

We’re the ratings that bad? I can’t believe it because my husband and I never missed an episode. But we still have Law & “friggin” order? Little burnt out on that one and “SVU!” Bring it back, please!!!

I can’t believe u cancelled golden boy…what a shame it was one of the best new shows in a long time…how can this be I watched it every week…I never missed a show now what crap r u going to replace it with…half the shows that r on now suck…oh but wait there still on the air…go figure!!!!

I have to agree with all of the comments made by the others that I have read. Nearly every time there is a show that I enjoy watching, it gets canceled. This was a show that I very much looked forward to watching, but it doesn’t matter. It’s truly sad that those who enjoyed this show are the minority.

This is an awesome show. One of the only ones I looked forward to.

I looked forward to this show each week. I t was an excellent change from the crap that America seems to crave, i.e Keeping up with the Kadashians, Jersey Shore. Americans need to support shows with teeth. This show had teeth. The premise was original. I hope another network wants to pick it up. If not, what a shame.

Was a terrific show and am really disappointed it will not be back this fall. I am not in reality shows so I will miss Theo James….what a cutie!! Think CBS should give it another try!!

I loved this show; I never missed an episode. Golden Boy had so many elements missing from other shows of the genre. What a terrible mistake to cancel this series.
Quality scripts, excellent cast and production.
Please bring it back!

Great QUALITY show. Sorry to see it cancelled. Shameful how empty-minded, idiotic shows return season after season, yet shows that are actually entertaining and of substance get the ax. Oh well, welcome to America, home of mediocrity. Really hope the network changes it mind!!!

Come on CBS…this was a great show. One of the better ones. A hell of a lot better than CSI Miami and you ran that stupid show for 9 years.

Loved this show. couldnt wait for season 2. this is ridiculous. they cancel good shows and keep stupid “reality” crap on.

The only show I worked my schedule around. Best show, best new show…my children were knew the tv was mine on Tuesday nights. Excepting live sports I have not watched tv since the series ended and was anticipating watching season 2. Will another channel pick it up? I hope so.

Golden Boy was my favorite show this spring. Showed real life people- heroic, yet flawed- as they faced difficult decisions. One of only 2 shows I made time to watch in real time.