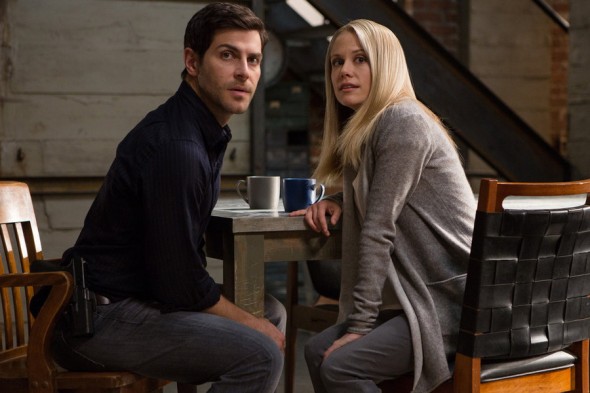 Good news for Grimm fans. Deadline reports NBC has renewed the drama for a sixth season.

The series is currently in the middle of its fifth season.

The renewal is a little bit surprising. So far, ratings for season six have been middling at best, with an average of .91 in the 18-49 demo and around 3.97 million viewers.

We absolutely love what our producers and cast have accomplished over the past five seasons. They have created a whole new world of creatures and have a truly devoted fan base. We can’t wait to see what comes next.”

What do you think? Do you watch Grimm? Are you glad it’s been renewed?

Grimm was great the first three or four seasons then it went rapidly downhill. Time to replace with something new.

Terrific show, best on tv, please do not cancel, we look forward to the new episodes, it has great actors and is well written. We are in our 60’s and we are fed up with reality rubbish, cooking and renovation shows, so it is great to see an innovative and imaginative program.

Please do not cancel this excellent show. It is one of the BEST on TV!!!

Grimm is at the top of my list of favorite shows and the only show other than sports that I watch on NBC. Sorry to hear that season 6 is a shortened season, but much better than no season 6 at all.

PULEEZE…Keep this one on the air!!! I, too, can’t understand why it doesn’t have a greater following as it is so refreshing to be able to relax and watch great writing combined with great acting in a storyline that allows one to stretch the creative imagination!

Love Grimm! This is the only show I make sure I don’t miss. I would hate to see it end.

Please don’t cancel Grimm. There is nothing much on that is well written. The show is the bomb.

I was so worried it might be canceled I am so happy to see it was not. One of my favorite shows! I am a 68 y/o women and with a master’s degree. It is creative, fun and a different kind of drama compared to regular tv shows. It imaginatory.

Great show love it and have watched Grimm since the first episode, so please keep it going, I am 64 and my family and friends are just as big of fans as I am, in Australia it is popular.

Love Grimm! It’s different.
I wonder why people don’t watch it? It’s a counterpart to Once Upon A Time, but not as frilly 😀

Absolutely love this show! It is fresh and different, not another lame reality show. The story lines, the characters, the creatures, the mystery all are creative and imaginative. Nick, Monroe, Rosalee and the Captain are my favorites. It is a show my husband and I enjoy watching together and then talking about; good vs. evil, overcoming adversity, growth and change, true friendship, diversity and acceptance and even world power and dominion! Thank you so much NBC for renewing the show. I thought I was going to have to give up on television altogether.

We love Grimm. It is in the top five shows we love to watch. It is exciting and holds your attention. We will be so upset if they don’t continue this series. Love all of the characters. Great job on the casting. Please continue!

I love this show. It is in my top 3! I would be really sad if it were to be canelled. It is an imaginative mystry, drama, suspense show with great characters . Good verse evil, w/o a lot of shut or foul language.

I love this show and so does my brother. I’m really hoping that this series continues on. I’m also wondering if they count Hulu in on there ratings because thats how we watch the show.