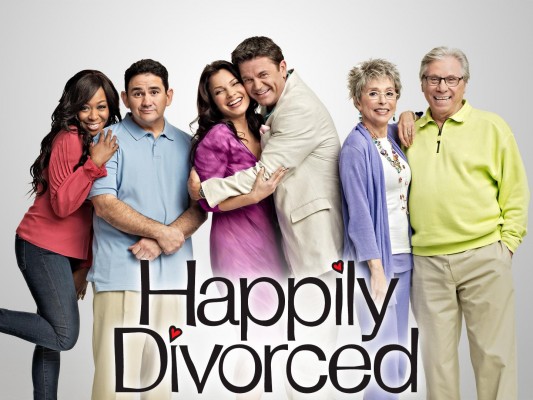 TV Land has decided to cancel Happily Divorced after two seasons. The sitcom’s co-creator, Peter Marc Jacobson, broke the news to his followers on Facebook this evening.

Jacobson wrote, “THANK YOU ALL FOR YOUR SUPPORT WITH HAPPILY DIVORCED. UNFORTUNATELY TVLAND HAS DECIDED NOT TO PICK US UP. BUT THANK YOU GUYS FOR UR LOVE N SUPPORT!”

Based on the real-life marriage of Fran Drescher and Jacobson, Happily Divorced follows a Los Angeles florist (Drescher) whose husband comes out of the closet after 18-years of marriage. Unable to sell their house, she and her gay ex-husband (John Michael Higgins) continue to live together. Still friends and now “happily divorced,” they both re-enter the dating world.

What do you think? Are you sorry to hear that Happily Divorced won’t be back for a third season? Did you lose interest in season two or are you still a fan?

I LOVE THIS SHOW. OMG WHAT A LAUGH. I WAS LOOKING FOR THE RETURN!!!!!

I thought this show was a hoot! I absolutley LOVED it!

I loved the show….it was me of the funniest shows on tv ….Fran and the Ex were hilarious…I watched every episode…..

I liked the show and will miss it.

I loved the show. Never missed an episode. Great ensemble cast. And just like on the Nanny had wonderful guest spots. Sorry to see it go.

Glad it is gone…very tacky

This was a great show. What a shame. I’m going to miss it.

I am really sad that its not coming back on…I have been waiting and waiting…you cancelled a funny show!!!

I like Happily Divorced and i really enjoyed watching sometimes.

Please sign the petition and spread the word. http://www.change.org/petitions/tv-land-reconsider-renewing-happily-divorced

I was a huge fan of the show, I wish that FD could fine a show that would be a huge hit for her. Living with Fran and this where both great shows. I wish they could have found a audience. She is a great actress. I will miss this show and FD.

Not a fan of this show but this is one of the last shows I expected to get cut.

The second TV Land sitcom to get the axe after Retired at 35. What a shame!