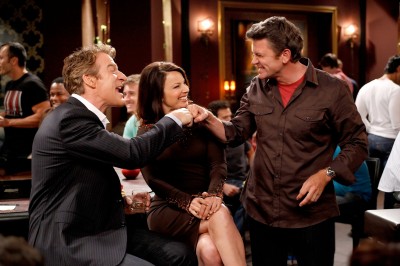 A few days ago, we reported that TV Land had renewed Happily Divorced for a third season of 12 episodes. The news was first announced by co-creators (and former spouses) Fran Drescher and Peter Marc Jacobson. It now appears that the news has changed.

TV Land has issued a press release indicating that the the 12 episode order is part of the current second season, bringing the installment total to 24. Of the cable channel’s slate of original sitcoms, only Hot in Cleveland and Happily Divorced have received full season orders.

The first dozen episodes of season two are currently airing on Wednesday nights and are expected to finish running by the end of May. So far, they’ve averaged a 0.3 rating in the 18-49 demographic with 1.16 million total viewers.

The second half of season two is expected to air later this year.

New York, NY – May 1, 2012 – TV Land has extended the second season of its original sitcom, “Happily Divorced,” starring Fran Drescher, picking up 12 additional episodes, it was officially announced today by Larry W. Jones, president, TV Land. This episode order takes the second season total to 24. The back-order of season two will debut later this year. The first 12 episodes of the second season are currently in premieres airing Wednesdays at 10:30pm ET/PT on TV Land.

“We are thrilled to continue our relationship with Fran and the rest of the amazing cast and crew on ‘Happily Divorced’,” said Jones. “This show uses humor brilliantly to communicate and relate with the audience. We feel so fortunate to have a show that can create social change through laughter.”

“Happily Divorced” stars and is inspired by the real-life story of sitcom favorite Fran Drescher (“The Nanny”), and revolves around Fran, a Los Angeles florist who finds out after 18-years of marriage that her husband is gay. Unable to sell the house with the economy tanking, she and her gay ex-husband Peter (John Michael Higgins, “Best in Show”) must continue to live together happily divorced as they both re-enter the dating world. “Happily Divorced” also features acclaimed actors Tichina Arnold (“Everybody Hates Chris”) as her best friend Judi; Rita Moreno (“OZ”) and Robert Walden (“All The President’s Men”) as Fran’s parents Glen and Dori and Valente Rodriguez (“George Lopez”) as Cesar, her flower shop employee. The show is filmed in front of a live studio audience.

What do you think? Do you think Happily Divorced will be renewed for a third season eventually?

Think about us old people (70’s). We deserve to be entertained in a decent manner and “Happily Divorced” is a well needed break from “New Girl” and “Modern Family.”

I LOVE this show!! Please reconsider bringing it back for season 3. It’s a great show and deserves to be on the air!!!

please please please bring the show back fran drescher is just wonderful and awesome i just couldnt believe that the show was cancelled what was t.v. land thinking oh that is right they were not thinkng at all.

PLEEEZZZ bring this show back!!! The story line & cast are great. Bringing in actors from her past show, ‘The Nanny’, has been wonderful to watch!!

Please bring back the show. I loved it

Fran drescher has been missed long enough,please bring her show back into our livingrooms.

Once again a network is removing entertaining television-viewing, (I pray not another boring reality show) with a very disappointing replacement. Please, please, bring this enjoyable television series back.

The show is so funny? I can’t believe it wasn’t renewed. Please do whatever it takes to get it back on the air! I miss them all.

One of the best shows on the air. Can’t believe it’s cancelled, instead of cancelling the show get rid of the people that don’t like. That would be a better idea.

I think Fran Dresher is one of the BEST comedy sitcom actresses. What can I do to get the show Happily Divorced back on the air?

I love this show!! Its light and funny with engaging characters. Fran Dresser is always amazingly funny. I am very sad to see this show cancelled when it was so good!!!

BRING BACK HAPPILY DIVORCED FOR A 3RD SEASON!!!!