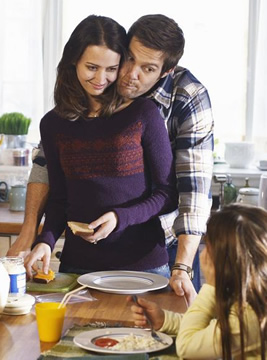 just watched Happy Town on Amazon Prime! It was a brilliant show – I’m baffled as to why it was cancelled!
I’m still left with questions – so much has been left unanswered!!!
Shoulda done what Joss Wheden did with Firefly – wrap it up with a movie!!!!

this is a great show the way the ended it was horrible . I want more and more I don’t watch tv much but I finely find something I liked and they pull it off.They should pull some of the stupid reality shows…..

ABC is stupid!!! How can you cancel this show. You people are out of touch. If you showed previews before show starts, people would watch it. I never even heard of it. Just watched it on Hulu. So disapppinted it was canceled. Good job Abc…not!!!

They always cancel the good ones without really giving them a chance. Guess it’s all about the money and screw excellent entertainment. Replace them with reality shows, that will get ratings. Hope someone else picks up the series.

My 13yo daughter and I just watched the entire series on local illegal DVDs here in China over the last two days – so disappointed to see it has been killed off. Agree with Jamie – so many unanswered questions.

WTH! This in no way wrapped up the season… I still have no clue 1. what that Die Blaue Tür (The Blue Door) movie was all about 2. who the Englishman & his son actually were. 3. Who Henley really is.4. What is really going on at Peggy Haplin’s house 5. What Greggy Stiviletto is really up to. 6. What the hell Alice is all about and finally 7. why is there a huge ass strange bird flying all over the freaking place……

Honestly, I wish I hadn’t watched it so now I wouldn’t be so freakin confused!!!

Another great summer series cancelled… ughhh. I really want to know what other shows were so great that Happy Town got such low ratings to deserve cancellation???

I loved this show but the timeslot was difficult. You have to stop putting new shows up against big popular ones and give them time to build their fan base. This was the type of show that people can get hooked on once they watch it. I agree a tv movie to sum it up would be awesome.

I love this show. ABC has to come up with a way to either summarize the TV series in a movie or bring back the show. It is a great show full of suspense, action and mystery. We definitely need closure.

HAPPY TOWN NEEDS TO COME BACK I WANT TO KNOW WHAT HAPPEN TO THE PEOPLE ALICE TOOK!!

Loved the show.. wish it had not been cancelled… it seems like all the good ones get cancelled.

This show was awesome. I only got to see the first 4 episodes before now and i love them all! A mystery mini series is just what i was hoping for, then they go and do something stupid like cancel it. There are too many unanswered questions…bring it back for season 2 or at least make a TV movie to sum it all up.