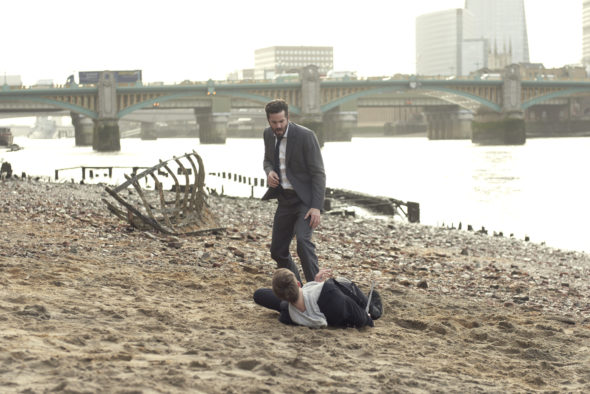 Are Renko and Hicks up for the job during the first season of the Hard Sun TV show on Hulu? As we all know, the Nielsen ratings typically play a big role in determining whether TV shows are cancelled or renewed. Hulu and other streaming platforms, however, collect their own data. If you’ve been watching this TV series, we’d love to know how you feel about the Hard Sun season one episodes. We invite you to rate them for us here.

A Hulu sci-fi crime drama, Hard Sun stars Jim Sturgess, Agyness Deyn, Nikki Amuka-Bird, Jojo Macari, Derek Riddell, Owain Arthur, Varada Sethu, Adrian Rawlins, Lorraine Burroughs, Aisling Bea, and Joplin Sibtain. Although DI Elaine Renko (Deyn) and DCI Charlie Hicks (Sturgess) are mismatched, these partners are out to enforce the laws and keep safe their loved ones, as encroaching natural disaster threatens to end the world. While investigating a murder in London’s inner city, the duo uncovers proof that the world will be destroyed in five years. Because the British government is desperate to keep that information secret, Security Service (i.e. MI5) operatives are out to silence Hicks and Renko — permanently.

What do you think? Which season one episodes of the Hard Sun TV series do you rate as wonderful, terrible, or somewhere between? Should Hulu cancel or renew Hard Sun for a second season? Don’t forget to vote, and share your thoughts, below.

Please bring Hard Sun back. It took a while to get going but surely with the current interest in post apocalyptic media of every sort (books, series, films and even comics) surely this is a no brainer. Gritty, realistic and set in the UK. Let’s see how the British handle the apocalypse we have seen everything America has too offer on countless dystopian/World ending stories. Let’s see how the Brits deal…..