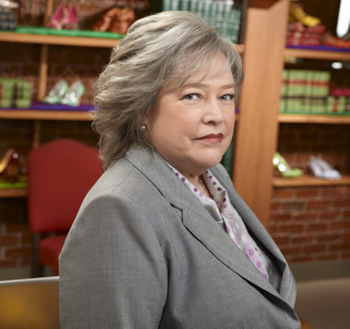 Harry’s Law was one of the best shows on TV. So sad they cancelled it. Seems like the only shows that make it are the stupid ones with the canned laughter. I hate the no-brain stupid shows that idiot people now watch. It has to be nasty or brainless for people to watch them. I am waiting for the idiots at CBS to cancel The Good Wife but hopefully they have more sense than NBC.

I read somewhere…(McLeans I think) that Harry’s Law was going to be taken off because the audience that it was attracting was too old. They do not want a 40 + demographic but would rather have shows on that appeal to the 20 ish age group. If you ask me…those shows suck, and I just don’t see whats funny or the least bit appealing. But then again…I’m 48 so my opinion doesn’t count. LOL

I love this show and if the execs at NBC would put a show on and leave it where they put it, their ratings would be great! How about some of them loosing their jobs!!

I agree that it would be a really big mistake to cancel Harry’s Law! My husband and I both enjoy watching it. I appreciate well-written, scripted dramas. I absolutely DO NOT LIKE all the so-called “reality shows!” Eventhough I do not fit the demographic that NBC appears to focus on, I do pay attention to the kinds of shows presented and I do support sponsors that support intelligent programs.

It would be a terrible mistake to take Harry’sLaw off
Tv it has been a breath of fresh air to adult tv. I am
So sick of shows with sex,boobs and masterbation.
That’s all they talk about anymore on other shows.
Save a GOOD SHOW Harry’s Law!!!!