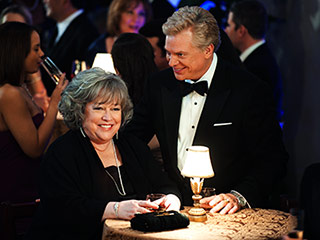 Kathy Bates can officially turn down any pending movie offers. Her TV series, Harry’s Law, has been renewed for a second season by NBC.

Debuting mid-season, the series started out decently with a 2.2 rating in the 18-49 demographic and 11.07 million viewers. While those aren’t great numbers, they are significantly better than the other shows that NBC has had in the Mondays at 10pm timeslot. Unfortunately, the ratings slid downward as the season progressed and the last original episode, on April 4th, registered just a 1.4 in the demo and 7.75 million viewers.

The season ended up averaging just a 1.8 in the demo and 9.39 million viewers. That’s just a bit more than NBC’s struggling (but now renewed) Chuck. So much for Harry’s Law being a hit.

While the demo numbers aren’t very good, the show does have the most viewers of any scripted series on the network. Total viewership isn’t nearly as important as the the demo ratings but having that many people watch and potentially talk about the show can help attract new demo viewers. Besides, NBC has a lot of other holes to fill on the 2011-12 schedule.

What do you think? Are you glad that Harry’s Law will be back for season two? How would you attract more 18-49 viewers so season three will be a guarantee?

Harry's Law: should the show be canceled? | TV Series Finale

[…] May, fans of Harry’s Law were overjoyed when NBC decided to renew the David E. Kelley series for another season. Unfortunately, the ratings have been terrible this […]

The show is awesome …….I love it I’m glad is back !! looking forward to the new season

Love the series! Keep it on!!!! With Kathy Bates, you can’t go wrong.

This is the BEST SHOW EVER!!!!! My husband and I really love it and we think Kathy Bates is Terrific!!!! Thanks for renewing a wonderful show. 🙂

Thank you for bringing this program back! I’ve missed it during the summer… it started with the reruns, but after a couple… stopped! So, I’m glad it’s coming back. It would be neat to have Season 1 on a all day Saturday right before Season 2 starts. Thanks again!

My husband and I love this show – I think part of the problem with retaining viewership is to “show up” every week and it seemed to jump around on different days too. SOOOO glad it’s back we love the tempo and cast – please keep it consistent so we can FIND it!
thanks!

David E. Kelley was also the producer (I think!) of Ally McBeal. He has a wonderful sense of humor about lawyers and an excellent sense of the law itself. Even though the cases are very strange, they always turn out well, even teaching us a thing or two. I love this show, and believe it will become as popular as Ally did. We need a bit of strangeness in our lives and this show provides it, with a lot of heart. And, I am not within that 18-49 range. But what difference does that make? Truth is, many in that… Read more »

Harry’s Law is a very smart, intelligent, serious (albeit humorous) drama boasting an outstanding cast. I absolutely LOVE this show! I see that the ratings were low and you were asking for suggestions on drawing the crowd somewhere between ages 18 – 49. I beleive it’s possible that the ratings came in low ONLY because many people HAD THE WRONG IMPRESSION of what the show was going to be about. As always, the FIRST of anything, whether it be a show or a melody or any story, is either going to turn someone on or turn them off. I personally… Read more »

Yea! Glad it’s coming back! Love the show and I wouldn’t change a thing. I am sooooo sick of all those reality shows that Harry’s Law is a welcomed change. It’s great. Give it a chance to catch on and I am sure it will be one of the best shows on TV. Thank You for giving us a chance to enjoy it for another season.

So glad Harry’s Law will return – the cast of characters blend well, and Kathy Bates, for me, was the initial draw. Don’t forget the Social Security set when you’re doing your surveys of who watches what! Keep your “reality” shows and give us more of Harry! Hubby and I wouldn’t miss it.