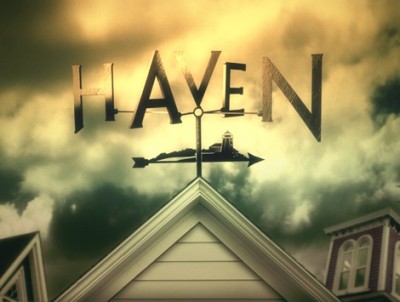 Fans of Haven on Syfy can rest easy for awhile. The cable channel has renewed the series for a fifth season of 26 episodes. Filming will commence this spring.

The first 13 episodes of season five will air this fall and the remaining installments will be released sometime in 2015. Past seasons have had 13 episodes apiece.

FIRST 13 EPISODES TO PREMIERE THIS FALL

The company’s comprehensive network extends around the globe including Canada, the US, the UK, Ireland, Spain, Australia, New Zealand, Benelux, France, Germany, Scandinavia, South Africa and South Korea. Through established Entertainment and Distribution divisions, the company provides extensive expertise in film distribution, television and music production, family programming and merchandising and licensing. Its current rights library is exploited across all media formats and includes more than 35,000 film and television titles, 2,800 hours of television programming and 45,000 music tracks. http://www.entertainmentonegroup.com/

Universal Networks International, the international channels division of NBCUniversal, is one of the world’s premier entertainment portfolios, delivering quality content and compelling brands to over 176 territories across Europe, the Middle East, Africa, Latin America and Asia Pacific. The brands in the portfolio include Universal Channel, Syfy, 13th Street, Studio Universal, E! Entertainment Television, The Style Network, DIVA Universal, Telemundo and Golf Channel. These unique brands deliver a full range of entertainment experiences to local audiences across the globe.

Universal Networks International also operates Movies 24. Further, NBCUniversal News Group, one of the most influential and respected portfolios of on-air and digital news properties in the world, operate CNBC and NBC News internationally.

What do you think? Do you like Haven? Are you happy that it will be back this year and next?

I thoroughly enjoy and look forward to the show. However I hope that if and when the series ends that they will tie up all the loose ends, like how old Audrey is, and who she is for real? And the how, when, where and who started the Troubles and why?

I love this show. I have since the beginning. And with 3 hot guys running around the set, I wish I could play Audrey

Love Haven! So glad it has been renewed! Hopefully “William” can be brought back in and made into a plot twist – maybe his character can be changed?

Yayyyyy! So excited. Thank you for not cancelling this show. My kids and I love this show and enjoy sitting down to watch it on friday nights. This show is extremely interesting and im looking forward to watching the new season.

I like Haven and am glad it has been renewed, but it is far from a favorite of mine. I thought with Colin Ferguson on this year, it would be so much better. Instead, they made this wonderful, quirky, funny actor a totally unredeemable character which, I think, is pulling this show down. A mistaken use of a terrific talent, it just makes me want to scream when they do this stuff!! Honestly? My husband stopped watching it and I watched it when I could but would not have minded it getting canceled, leaving more room for fantastic sci fi… Read more »

Hopefully SYFY would give their avid viewers a chance to enjoy Season 5. 🙂

Thanks For renewing this awesome Series.

I Agree With Judy should you end the series plan it well please.

While I agree that it could have been ended in Season four with a rewrite of the last 2 episodes, I suspect that SyFy does not want to nor do the writers and cast as it is money in their pocket. Will the seasons be less stellar? Possibly, but I look at it this way, what can they add now that what happened at the end of season 4 happened. What new mysteries can be found or rediscovered now? With the loss of Warehouse 13 looming and after canceling Eureka, there needs to be good SyFy on this channel, I… Read more »

Haven is one of the best shows on television! It’s next to impossible to find shows with original concepts, but Haven has originality in spades! Whomever out there, who thinks that the best way to honor a show is by ending it, is obviously confused by the notion of fan loyalty! The show has never been disappointing, so I have complete trust in the writers, producers, cast, and creators! I’m thrilled that there will be a fifth season, and even more elated that it will have double the episodes! Way to go Haven!

There is so much more that they can add and do for a tv show like this. Show tells us that there is nothing thAt can’t be done. Show were there no limits and how a show can keep going on. There so much we still don’t no bout everything and person and place on the show. There so much for us to see and learn. Great show and my favorite show ever that I have seen and I watched slot of shows. I love others shows as well, but this is number #1′ AndreA

I have watched the show faithfully since episode one but I am very disappointed in Syfy ordering 26 more episodes. The story has a definite end and the last episode of season four was the perfect time to end it. Ending it then would have maintained the show’s quality and integrity. Now it will be stretched and drawn out for 26 episodes that will result in making it into a joke and a sad shadow of what it once was. Fans got greedy and wanted more episodes despite the fact that the show would suffer. True fans prefer to see… Read more »

I agree the show could have ended with Season 4, having a series finale with a real end and not a cliff hanger – but it didn’t. And since it did not, the show has a responsibility to the viewers to give the story a decent end. Extending the series to another season was the only way to do it. The writing has been good to this point, I disagree that the show would be made into a joke. The show can still end with integrity.

Thank you for the renewal of Haven. Thank you for showing some respect for those viewers who watched for 4 seasons. All I ask is if you choose to end the series – please plan a series finale for those of us who showed such support for this fun and creative show.