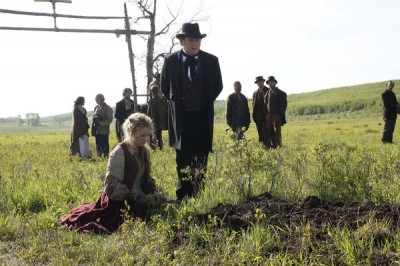 AMC has renewed their successful Hell on Wheels drama for a third season of 10 episodes.

Hell on Wheels takes place in post-Civil War America and follows a former Confederate soldier as he travels West while the first transcontinental railroad is being constructed. The show features the talents of Anson Mount, Common, Colm Meaney, Dominique McElligott, Christopher Heyerdahl, and Robin McLeavy.

The second season of Hello on Wheels finished airing on October 7th and the 10 episodes averaged a 0.6 rating in the 18-49 demographic with 2.36 million viewers. That was down when compared to the first season’s ratings — a 1.0 in the demo and 2.98 million. Only The Killing did worse for AMC this year and that was cancelled back in July.

Along with the renewal comes word that Hell on Wheels creators Joe and Tony Gayton are stepping down as executive producers and will no longer be involved day-to-day. They may end up consulting with John Shiban, the remaining showrunner.

The Gaytons had a two year contract for the show and recently sold a new drama to NBC. It will revolve around a recent college graduate who can’t find a job so he starts transporting cash for criminals.

What do you think? Are you glad to hear that Hell on Wheels has been renewed? Do you think the show will be affected negatively by the Gaytons’ departure?

I was so upset because I did not see season 2 of hell on wheels because dish was fighting with amc I wanted to leave and get another company but could not leave my contract. Love that show will you ever put it on DVD so I can catch up.? Please don’t cancel this great great show. You are renewing right?

Totally engaging drama. That and the Killing were so good – granted story lines had to change, but kill Lily Bell. That was and is still depressing. Keep hoping that there was some twist to that storyline.

Yes, I am so glad that one of my most favorite shows will be continuing. Thanks so much!!!

ABSOLUTELY EXCELLENT DECISION IN RENEWING HELL ON WHEELS FOR A 3rd SEASON!!! Great show, NOT fluff, NOT “reality” Sets/location well done & appreciate something with some filling to it AMC has steamed ahead in my opinion. Thanks 4 renewing

This is a great show, I record every show and watch it several times. The end of season two was depressing. Season one had more music, which I thought added a lot to the show. I hope season three will have the same outstanding music as season one. I often thought that a different country music star would be a great to each show? Please keep up the good work

please, please don’t cancel Hell on Wheels. one of the better shoes on television. Wish the second season had ended better.

I can’t say enough good things about Hell on Wheels. I LOVE this show and all the actors are superb. The music at the start of the show makes my spirit soar. How the ads can constantly brag about the show Walking Dead is beyond me; I never watch it but do see enough to know I don’t think it can even compare to Hell on Wheels. Sure do hope this will continue – this Hell on Wheels.
Patti

Love the show and happy it will be returning. How will the Swede return?

Love the show. When does the Season begin?

I loved the first two seasons, but I think they boxed themselves into a corner with the way season two ended… I’m very dissapointed and although I’ll watch the first and second eppisodes of season 3, if they don’t hit us with something big, I won’t continue to watch.

Being a railroad buff i am enjoying the show, glad for season 3.

[…] Earlier this week, AMC gave Hell on Wheels a season three renewal of 10 episodes. Now, it appears that could be in jeopardy. […]

Yea! Love the show! Need to advertise more, I found it by accident.

Great that this got a 3rd season. Season 2 did end well (admittedly very depressing) so will be interesting to see where they go with the new season.