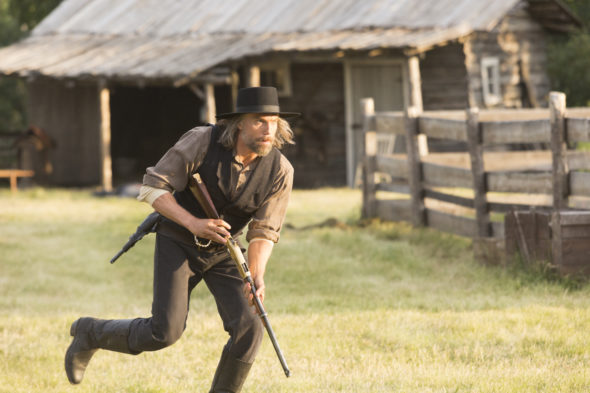 The devil’s in the details. Season 5B of the Hell On Wheels TV series on AMC premieres Saturday, June 11, 2016 at 9:00pm ET. While not cancelled, Hell On Wheels is ending. AMC says it is the “end of the line for Cullen Bohannon (Anson Mount) and his work on America’s first transcontinental railroad.”

Get a first look at the last season of Hell On Wheels (and the first season of The American West) from AMC.

IMMEDIATELY FOLLOWED BY THE SERIES PREMIERE OF THE 8 EPISODE LIMITED EVENT SERIES “THE AMERICAN WEST,” EXECUTIVE PRODUCED BY

NEW YORK, NY, April 27, 2016 – AMC announced today that the original series “Hell on Wheels” is set to premiere the last seven episodes of its fifth and final season on Saturday, June 11 at 9 PM, followed by the series premiere of the Robert Redford and Stephen David (“The Men Who Built America,” “The World Wars”) produced limited event series “The American West” at 10 PM, making Saturday nights on AMC must-watch television for Western fans.

The last seven episodes of “Hell on Wheels” is the end of the line for Cullen Bohannon (Anson Mount) and his work on America’s first transcontinental railroad. The final push to finish brings with it a reckoning for Bohannon and the men standing in his path: the bloodthirsty Swede (Christopher Heyerdahl); the mercenary Chang (Byron Mann); and the rapacious Thomas Durant (Colm Meaney). Bohannon contends with corruption, greed and murder as he leads the trek to complete the final stages of the building of the railroad from the Central Pacific through the Sierras and across the Utah desert to Promontory Point. While the railroad’s completion is certain, who and what will survive when the golden spike is finally planted remains in question — with no one more at risk than Cullen Bohannon.

Spanning the years 1865 to 1890, “The American West,” will show how – in the aftermath of the Civil War – the United States transforms into the “land of opportunity.” Viewers will be transported into the violent world of cowboys, Indians, outlaws and law men. The 8-episode limited event series chronicles the personal, little-known stories of Western legends such as Jesse James, Billy the Kid, Wyatt Earp, Crazy Horse and Sitting Bull. The series features exclusive interviews with notable names from classic Western films, including Redford, James Caan, Burt Reynolds, Tom Selleck, Kiefer Sutherland, Mark Harmon, Ed Harris and more.

“Over the last ten years, AMC has had wonderful success with Westerns in various formats: from the Emmy®-winning mini-series ‘Broken Trail,’ to the Saturday line-up of classic movies like Rifleman and Hondo, leading into our fan favorite scripted drama ‘Hell on Wheels’ and now with our wild west limited event series “The American West,” said Joel Stillerman, president of original programming and development for AMC and SundanceTV. “We’ve learned that the West may have been won over 150 years ago, but it continues to win with old and new fans alike. I have had the pleasure of working with some of the best in the business and John Wirth and his team are no exception. It has been a pleasure working with the entire ‘Hell on Wheels’ cast and crew over the last five seasons and on behalf of all of us at AMC, we thank you for creating an epic program that will live on through your many loyal fans and the new ones yet to come. As we continue to explore untold stories, I am proud to expand our partnership with Stephen David. Stephen’s storytelling has previously provided AMC viewers a look at the making of the mob and now, we are excited to share the story of the post-Civil War western expansion. We also welcome Robert Redford and Sundance production to AMC as we continue to provide the best in Western content to our audience with ‘The American West.’”

“Making this show has been the highlight of my career,” said John Wirth, executive producer, writer and showrunner of “Hell on Wheels.” “I can’t imagine a better cast, crew, group of writers or network. Thank you, Charlie Collier, Joel Stillerman and Susie Fitzgerald for supporting us every step of the way.”

“We are extremely excited to continue our partnership with AMC and share the untold stories of the west,” said Stephen David, president of Stephen David Entertainment. “The series will allow viewers the opportunity to explore an era of famous outlaws and lawmen who shaped American history, connected through a larger story that’s never been told before in this way.”

The fourth season of “Hell on Wheels” delivered 3.5 million viewers per episode on average, including 1.3 million adults 25-54, in Nielsen live+7 ratings. The show is consistently one of the top scripted originals on Saturday nights and is currently the #1 show on cable and #2 in all of television, cable and broadcast, for its time slot.

“The American West” is executive produced by Emmy® Award-winning Stephen David Entertainment and Robert Redford and Laura Michalchyshyn with Sundance Productions. DRG is the international distributor for “The American West.”

AMC is home to some of the most popular and acclaimed programs on television. AMC was the first basic cable network to ever win the Emmy® Award for Outstanding Drama Series with “Mad Men” in 2008, which then went on to win the coveted award four years in a row, before “Breaking Bad” won it in 2013 and 2014. The network’s series “The Walking Dead” is the highest-rated series in cable history and the number one show on television among adults 18-49 for the last four years. AMC’s other current original drama series include “Better Call Saul,” “Hell on Wheels,” “Turn: Washington’s Spies,” “Halt and Catch Fire,” “Humans,” “Fear the Walking Dead,” “Into the Badlands” and the forthcoming “The Night Manager,” “Feed the Beast,” “Preacher,” “The Son” and “The Terror.” AMC also explores authentic worlds and discussion with original shows like “Talking Dead,” “The Making of The Mob,” “Comic Book Men” and the upcoming “Ride with Norman Reedus” and “The American West.” AMC is owned and operated by AMC Networks Inc. and its sister networks include IFC, SundanceTV, BBC America and WE tv. AMC is available across all platforms, including on-air, online, on demand and mobile.

Sad to see the show end, Anson was awesome and a definite draw for the ladies.

Moving this show to Saturday was the cause of viewer decline.. there needs to be a spin off of Cullum in China. Finding his girl & again fighting for something bigger. Right now the loss of hell
On wheels is a loss to good cable tv.