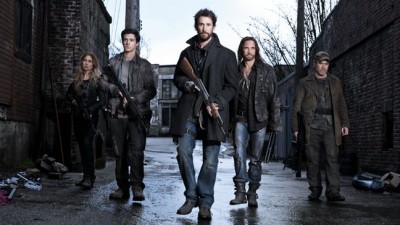 TV show description:
This science-fiction TV series begins with the chaotic aftermath of an alien attack that has left most of the world completely incapacitated. In the six months since the initial invasion, the few survivors have banded together outside major cities to begin fighting back. Each day is a test of survival as the citizen soldiers work to protect the people in their care while also engaging in an insurgency campaign against the occupying alien force.

At the center of the series is Tom Mason (Noah Wyle), a bookish history professor from Boston. He never imagined that he would one day be putting his extensive knowledge of military tactics to use in an actual war, much less one being waged against alien invaders. His wife was killed in the initial attack, and one of his three boys — bookish middle son Ben (Connor Jessup) — has been captured.

Determined to get Ben back and to ensure the safety of his other two sons, Tom becomes one of the leaders of the resistance movement known as the 2nd Mass (because of their location in Boston, Massachusetts). They are constantly trying to gain intelligence about the aliens to one day help them outsmart and overtake the aliens — and hopefully rebuild their lives.

Hal Mason (Drew Roy) is Tom’s oldest son who’s grown quickly into manhood during the six months since the invasion. Hal was an athletic and popular kid in school and now proves himself both brave and confident in the field. With younger brother Ben captured by the aliens and eight-year-old brother Matt (Maxim Knight) struggling to cope, Hal now appreciates how much his family truly means to him. Hal also manages to find time for a new girlfriend, Karen Nadler (Jessy Schram).

The commander of the 2nd Mass resistance is Captain Dan Weaver (Will Patton), a tough rattlesnake-of-a-soldier, with a no-nonsense attitude and little patience for babysitting civilians. He puts his military skills and experience to good use. Like many of the survivors, Weaver has faced personal loss, but he keeps that story buried underneath his dogged determination.

Anne Glass (Moon Bloodgood) is a pediatrician who lost her only child in the initial attack, a horrific tragedy that she has yet to face fully. She pours herself into her work as a doctor for the 2nd Mass, doing what she can to help the survivors cope, both physically and emotionally. Anne’s only remaining family members are her aunt and uncle, who have also found refuge with the 2nd Mass. She develops a close friendship with Tom as a result of their shared tragedy.

Anne also takes Lourdes (Seychelle Gabriel), a young first-year med student, under her wing to help out in the makeshift clinic. A devout Christian, Lourdes finds her faith strengthened and tested by the tragic circumstances surrounding her.

Dai (Peter Shinkoda) is Tom’s right-hand man in the field. A strong, quick and highly-skilled soldier who doesn’t choke in the line of fire, Dai is also a demon on a motorcycle.
Anthony (Mpho Koaho) is one of the best fighters in the 2nd Mass. He previously served as a Boston police officer and is a crack shot with a rifle. Anthony’s always eager to volunteer for even the most dangerous missions. He also knows when it’s time to sit tight and wait for the enemy to make a mistake.

John Pope (Colin Cunningham) is the leader of a band of marauders. He introduces himself to the 2nd Mass by taking a group of hostages and offering to exchange their freedom for weapons. This smart, resourceful, and charismatic ex-con takes great pleasure in killing “Skitters” aliens, even hunting them like wild game. A shameless opportunist and an excellent chef, Pope considers the invasion the best thing that ever happened to him.

Margaret (Sarah Sanguin Carter) joins the 2nd Mass after spending a difficult time with Pope’s misfit gang. It’s just the latest emotionally scarring experience for a woman who has endured and overcome all the worst that life could throw at her. Strong, tough and fearless, Margaret remains cool under pressure and has impeccable aim with a gun. She’s also a good friend who offers a helping hand whenever needed.

The aliens that these humans fight are mighty, mysterious and merciless. They are highly intelligent and use military-like tactics, which makes them an overwhelming force against the 2nd Mass. There are two types of aliens that the human survivors have named Skitters and Mechs. The Skitters have spider-like bodies and incredible strength and agility. The deadly, robotic Mechs stand upright and can shoot bullets from their arms. The aliens control captured children through bio-mechanical harnesses but have an even bigger plan for them.

Series Finale:
Episode #52 — Reborn
The final standoff brings the Masons, the 2nd Mass and their new allies into the bowels of an iconic American location, wrought with new and unpredictable obstacles. Despite great loss along the way, they must persevere with hopes of once and for all reclaiming Earth and humanity.
First aired: August 30, 2015.

What do you think? Do you like the Falling Skies TV series? Do you think it should have ended or been renewed for a sixth season?

Please re-think and give a 6th season! I love the show!

Falling Skies has been a great series. The plot speed has been breath taking. The introduction of gee whiz alien tech was relentless. I think another 5 episodes a year could have actually helped. It can be tasking to absorb it all. In this age of 15, or less shows a season I find it helpful to review on HULU or similar outlets, just to devour all the action. Any good show is worth a second look. The break neck speed of a successful show now, demands it.

Best series I have watched in a very long time! Sorry to see it end, but was pleased with the finale. Look forward to maybe another series similar in the future.

Worst. Series. Finally. Ever. Are you telling me he carried a dead person from the Lincoln Memorial to a shore or at the very least a body of water so big it had waves? How about walking for 20 min of the finally telling boring stories, in the dark…whispering? Really? Writing and directing should have gone to people with imagination and vision. Same director is doing the first Minority Report episode. Already not sure if I’m interested just because of him.

Alex must remember it was a SHOW! If you didn’t care for it, maybe you should have watched something else. Even though you are entitled to your opinion as is everyone else.

please don’t cancel. it is one of the most interesting shows in a very long while. very good writing, seat riveting each week

Please consider renewing Falling Skies! I really love this series and seems to be ending to soon to have a proper finish.

We really love this show. We enjoy just about anything that is sy-fi and this is definitely it. We hope they will renew for another season.

I have enjoyed “Falling Skies” since the first episode and while I will certainly miss it, I look forward to its conclusion. Like a book, a good story will grab your attention immediately, keep you engaged, and then cause you to experience a bittersweet excitement as you realize you are nearing the end. Too often, I have become involved with watching programs that were quite engaging starting out, but later begin to meander all over the place, making no sense, as if to milk the series for every last drop, rather than allow it to come to a satisfying conclusion.… Read more »

I have really enjoyed watching fallingskies. I hope you all will consider renewing the show or possible making a sequel about rebuilding the country after the invasion is over.

WhTs up with Cochise ? They show him but don’t show if humanS trust him anymore ?

Regarding the show Falling skies .Me and my wife love this show please don’t end it alot of show we watch are being cancelled

I see that the show has a fifth season. GOOD! I hope it is done so that there are not any loose ends!!! Sorry to see it go!!!!!

I am always looking for the series and only find it now and then. Very frustrating great shows. I am buying the series so enjoy all that I missed. Thanks for this promotion. Lelyn.