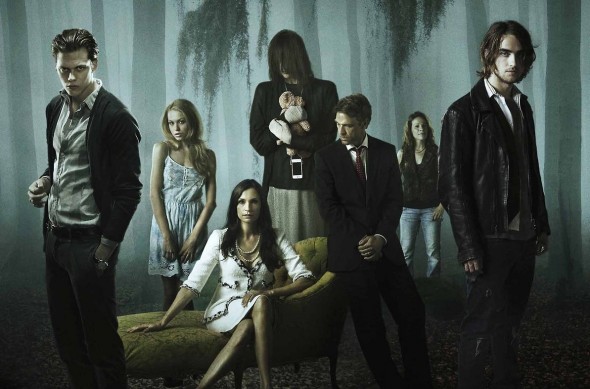 The third season of the Netflix original series, Hemlock Grove, is upon us. Hemlock Grove is based on the Brian McGreevy novel of the same name. While not cancelled in the technical sense, the most recent renewal was for a third and final season.

Because is a Netflix original series, the entire season from premiere to finale will be released on the same day. Hemlock Grove stars Famke Janssen, Bill Skarsgård, and Landon Liboiron. See the following Netflix press release for details, then scroll down and watch “The Final Chapter: Official Trailer.”

The third and final season of the Netflix original series, Hemlock Grove will premiere October 23rd. All ten (10) episodes of the finale season will be available Friday, October 23 at 12:01am PT, exclusively on Netflix.

Hemlock Grove comes to a riveting and deliciously disturbing conclusion. As the town’s grim secrets continue to unravel at an alarming pace, Olivia (Famke Janssen), Roman (Bill Skarsgård), Peter (Landon Liboiron) and Shelley (Madeleine Martin) are introduced to mysterious new people while facing dangerous and unexpected obstacles. As enemies both foreign and familial close in, Peter and Roman learn that in order to prevent the ‘end of days,’ they will both need to sacrifice their humanity and release their true inner monsters.

What do you think? Have you been enjoying Hemlock Grove on Netflix? Will you binge-watch the season in a weekend, or make the final season last as long as possible? Do you think it is time for Hemlock Grove to end, or would you have watched a fourth season?

Netflix plezzzzzz change your mind!
Hemlock Grove is a show I have watched over and over. Alone so I can enjoy!

Hemlock Grove is by far my top favorite #1 tv series! I am absolutely devastated this is the final season and we wont be getting any more episodes. I would watch many, many more seasons. Ive been dying waiting for season 3, SO EXCITED to watch it finally yet Very sad to see it go! HemlockGroveILoveYou!

Ending??? Omg, surely this is a joke?? I’d have watched another season and even another after that! This can’t be true!!? NOOOOOO!!!!!

Hemlock grove has been the best Netflix series I have watched. I recommend this series to all of my friends because it is so good. I am not ready for it to end. I watched the first two seasons within 2 weeks. It’s very addicting and is easily my favorite show. Please continue with more seasons. This makes me so frustrated thinking this is there last.

I’m a big fan of Hemlock Grove, both the book and the series, I don’t like knowing this is the last season, but we have to move on into another stories. It’s release on my bday so what a present!, will watch all the weekend and then more. But Hemlock will always be there on Netflix for my enjoyment.