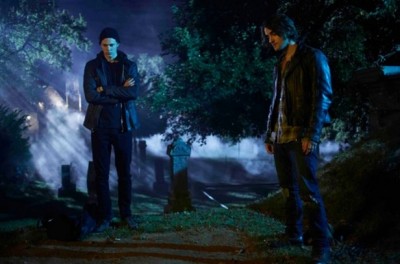 Netflix has announced that their original drama, Hemlock Grove, will be returning for season two. The 10 episodes will debut some time next year.

Gothic Thriller “Hemlock Grove” Back on Netflix for a Second Season

Ten New Episodes to Premiere in 2014

(Beverly Hills, CA – June 19, 2013) – The Netflix Original Series “Hemlock Grove,” a riveting and eerie mystery from executive producer Eli Roth and based on Brian McGreevy’s novel of the same name, will return with a second season next year. Seasoned showrunner Charles H. (Chic) Eglee (“The Walking Dead,” “Dexter,” “The Shield”) joins the popular series as executive producer in season two.

“The worldwide fan response to ‘Hemlock Grove’ was phenomenal” said Executive Producer Eli Roth. “Netflix members loved the potent combination of sexy monsters, mystery, and the dark family soap opera that ended with a huge twist, leaving audiences worldwide totally shocked. Season One was just a warm up for what we have in store for season two. Get ready to be scared in ways you never expected.”

“In its first season, Eli, Brian, Lee and the team did an incredible job of introducing viewers to a unique world of memorable characters,” said Cindy Holland, Vice President of Original Content at Netflix. “Chic’s addition to the show, and his experience on such fan favorites as ‘The Shield,’ ‘The Walking Dead’ and ‘Dexter,” will heighten the intensity of the mystery that grips Hemlock Grove.”

“We are thrilled to be working with Netflix on the second season of ‘Hemlock Grove’, a show that the audience has enthusiastically embraced,” commented Katie O’Connell, CEO of Gaumont International Television.

“Hemlock Grove” is a gothic horror thriller which explores the strange happenings in a small Pennsylvania town. The show focuses on the unlikely friendship between the founding family’s young heir, Roman Godfrey, and the relative newcomer and outsider, Peter Rumancek. Each holds a monstrous secret that has been unleashed.

The drama series is the first foray into television by internationally acclaimed horror master Eli Roth (“Hostel,” “Cabin Fever”). It was developed by Brian McGreevy & Lee Shipman and is executive produced by Roth, Eglee, McGreevy & Shipman, Eric Newman and Michael Connolly. The one-hour gothic thriller is produced by Gaumont International Television for Netflix.

Netflix is the world’s leading Internet television network with more than 36 million members in 40 countries enjoying more than one billion hours of TV shows and movies per month, including original series. For one low monthly price, Netflix members can watch as much as they want, anytime, anywhere, on nearly any Internet-connected screen. Members can play, pause and resume watching, all without commercials or commitments. Learn more about how Netflix (NASDAQ: NFLX) is pioneering Internet television at www.netflix.com or follow Netflix on Facebook and Twitter. Netflix’s original series include the political drama “House of Cards,” which stars Kevin Spacey and Robin Wright; the fourth season of the critically-acclaimed comedy “Arrested Development;” and the second season of “Lilyhammer,” which stars Steven Van Zandt; Jenji Kohan’s series “Orange is the New Black,” which stars Taylor Schilling, Laura Prepon and Jason Biggs; and “Sense8” the upcoming global tale of minds linked and souls hunted from the Wachowskis and J. Michael Straczynski.

Gaumont International Television is the recently launched production and distribution studio based in Los Angeles and part of Gaumont, the legendary European-based motion picture studio. Gaumont, formed in 1895, is one of the main European production companies with a film library holding over 900 titles. As an independent studio, Gaumont International Television is producing high-quality drama and comedy television programming for the U.S. and international markets with a number of projects currently in the works, including “Hannibal” for NBC, “Hemlock Grove” for Netflix and “Barbarella” for Canal Plus.

What do you think? Are you a fan of this series? How does it compare to other exclusive Netflix shows?