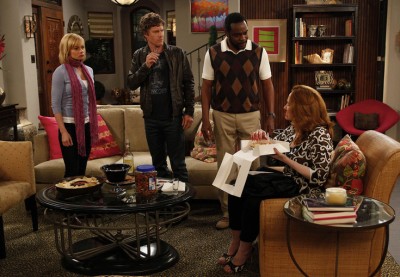 There just wasn’t enough love for this FOX sitcom. The network has cancelled I Hate My Teenage Daughter after a handful of episodes.

The sitcom revolves around a pair of moms who realize that their daughters have become the kind of girls who terrorized them in high school. The cast includes Aisha Dee, Chad L. Coleman, Eric Sheffer Stevens, Jaime Pressly, Katie Finneran, Kevin Rahm, and Kristi Lauren.

I Hate My Teenage Daughter debuted back in November to a respectable 2.8 rating in the 18-49 demographic with 6.80 million total viewers. That was a positive performance but no doubt had a lot to do with having FOX’s very successful X Factor as a lead-in.

The ratings for the second episode fell by 25% and the thirds dropped by another 14% to a 1.8 in the demo with 5.06 million. Those numbers were a different story. The network put the show on hiatus after four installments.

They brought it back as part of a two-hour comedy block on March 6th and was the network’s weakest performer. The ratings fell even lower for subsequent episodes and FOX pulled the show after three weeks.

They’d planned to pair episodes with American Idol but ditched that idea.

They later announced they’d be burning off the remaining episodes of Teenage Daughter in June on Sunday nights but have opted to fill those timeslots with animation repeats instead.

On our FOX Ratings Report Card, Teenage Daughter has earned a “D+” grade. It ranks as #15 on the list of shows of this season.

FOX may decide to air the remaining half-dozen episodes sometime this summer but for right now, that doesn’t seem very likely.

What do you think? Are you sorry to hear that the show’s been cancelled? Do you think it was better than the ratings indicated? Would you like to see the unaired episodes?

i know this is a bit late , but i recently started watching i hate my teenage daughter and was waiting for more episodes to come out only to find out that it’s been cancelled for years now….I’ve been going through some really hard times lately and i found this show to be very helpful; it’s very funny, the acting is amazing and the idea of the show was great and i was really getting into it. i just think this is really sad.

This is one of my most favorite shows. I’m actually upset they pulled this show. If there was anything in the world that could bring back this show i would do it.

I liked the show but don’t think it had a chance. The name was a turnoff to a lot of people and they just dismissed it off hand that they weren’t going to watch because of it. It started later in the season then other shows and then had a long break which helped screw them. They weren’t just given a time slot and left there so people even knew when it was on. The shows’ marketing wasn’t done well. And all the media reports on the show were slamming it before it even started. I don’t get why they… Read more »

The show even reached the Netherlands. We were watching the show life in the middle of the night. Very sorry to hear the show stopped and will not be continued. Stupid! It’s a good show. Give it a change to succeed. The actors are fun, the whole show is fun. So i’d say give it another shot!!!!!! Try the Netherlands for instant. It’ll be a big hit, I’m sure of that. One tip: Make a little bit more positive publicity.

AND BESIDES, YOU HAVENT FOX HASNT GIVIN ENOUGH TIME FOR THIS SHOW TO SUCCESS OR GO AROUND, YES IT MAY DROP IN THE BEGINNING BUT IT GETS BETTER AND BETTER ! IM WORKING AND STUDYING IN THE MOVIE AND SHOW INDUSTRY AS WELL, SO I UNDERSTAND ALL YOUR CONCERNS, IF IT WAS RELEASED IN NOVEMBER AND ITS NOW MAY GOING TO JUNE THATS ABOUT 7 – 8 MONTHS ONLY, THATS TOTALLY NOT ENOUGH IT, IM SURE IT HASNT EVEN REACHED OTHER PLACES AROUND THE WORLD, AND I GUARANTEE YOU FOX, IF YOU KEEP AIRING THIS SHOW, YOU VIEWING WILL INCREASE… Read more »

OH MY GOD, I CAN NOT BELIEVE ITS CANCELLED, I MEAN I LOVED THIS SHOW, IM A TEENAGER TOO, SO I RELATED TO IT, AND IT ACTUALLY MADE MY MOTHER AND I GET ALONG BETTER, WE WOULD SIT AND WATCH IT TOGETHER EVERY TIME ITS ON, I HAVE BOUGHT IT OF ITUNES TOO, AND I WATCH THE SAME EPISODES OVER AND OVER AGAIN EVERY SINCE DAY! THIS SHOW HAD A GOOD IMPACKED ON ME AND MY FAMILY, SPECIALLY WITH MY MOTHER, WE USED TO NEVER SIT TOGETHER OR TALK, WE WOULD ALWAYS FIGHT, BUT THIS SHOW CHANGED THAT IT CHANGED… Read more »

Too bad!! I loved this sitcom!! And if you remember, when two and a half premiered, the ratings where pretty low too…

I am upset that the show is being cancelled. It is so funny. It was one of the few shows that a mom to a teenage daughter could relate to. I was really looking forward to more episodes. I just don’t understand why shows like The Simpsons, How I Met Your Mother, Two and a half Men…are still on the air, but a good, wholesome comedy is cancelled and without an ending. Of course the show probably would have lasted if it had not had so many breaks in between episodes.

I liked it, I work most of the time so I got what I can from Hulu. I the shows were getting better. They didn’t even give it a fair shot, I only watch Family Guy, and the Simpsons on FOX.
And Family Guy I get from Hulu as well, so I rarely tune in on FOX…. It’s sad to see this show go. This hurts, but not as bad as which ever network killed Samantha Who?… That killed me.

fox didn’t even give this one a chance. The episodes were getting better, and the acting was pretty good.

I just wasn’t into it.

I’m very disappointed that the remaining eps aren’t being shown. It was a better show than the ratings (and title) indicated. And it was improving every episode. It just got ripped for the first ep (which should never have seen the light of day) and never recovered. I think for the most part, traditional multi-camera sitcoms are a hard sell these days.
Too bad, because the cast was great, particularly the guys. Love Eric Sheffer Stevens & Kevin Rahm.