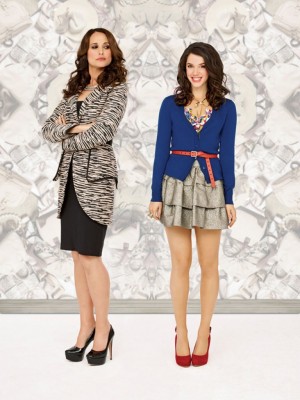 It looked like the fate of Jane By Design could go either way but ABC Family has now decided to cancel the TV series. The drama ran for one season of 18 episodes.

The ABC Family series premiered in January to 1.6 million viewers and a 0.6 rating in the 18-49 demographic. The numbers for week two dropped about 30%. The numbers fluctuated week-to-week but viewership never got that high again.

The first season ended up averaging 1.29 million total viewers and a 0.5 demo rating. Jane By Design ended up being the lowest-rated drama of the current crop. and fans understandably became nervous when the finale aired in late July and a renewal hadn’t materialized. We now know it won’t be forthcoming.

What do you think? Are you sorry to hear that Jane By Design has been cancelled? What were you hoping to see in season two?

Please please bring Jane back!!! I love this show

I just found out Jane by Design was canceled. Im extremely disappointed. I only have a few shows that I enjoy watching and this was one of them. Its also a good show for teenagers which there are not many. Better be something good in its place. Seen trailer for the possible one coming out “Nothing to Lose”. This looks good but not as much of a feel good show as Jane by Design was.

YOU SHOULD BRING BACK JANE BY DESIGN IT WAS A GREAT SHOW WE NEED TO KNOW WHAT HAPPENED TO JANE YOU CAN;T LEAVE US HANGING LIKE THIS

Wow! Bummer! Can’t believe it was cancelled! Finally a show for a preteen and her mom and it couldn’t even make it through the 3rd season…it could’ve been a good show… Too bad!

I love this show, it didn’t get enough publicity while it was on air!!! I just watched the whole first season on Netflix with my 9 year old daughter and we both loved it. I can’t believe we will never see what happens with Jane! I was so looking forward to the second season.

So they keep “Melissa and Joey” but cancel “Jane by Design”? Does anyone else see how illogical this logic is of the network????

The show has made its way to Europe. Just saw the final episode on Danish television, and what a shame it won’t continue. Really enjoyed all the aspects; the fashion, drama, friendship and dating. Too bad we don’t get to see an end to all the lose ends.

I just recently found Jane By Design and fell in love with it. Watched every episode back to back. So sad to hear it is cancelled. Much too good a show to be cancelled. I am not a teenager. I am a 58 year old woman who enjoyed the storyline very much.

My 15 yr old daughter really enjoyed the show. I also enjoyed it very much. It was a well made show . Why do the good shows always get cancelled and the bad shows (ex. reality) always get to stay on? What is happening to this world!

I loved Jane by design..they need ot bring it back!!!

They cancelled Jane by design?!?!?! I can’t believe it !!!!!! jane by design was the only show that I like so much, no show will top it!!!!! For me it was so special that I wish you would reconsider about what you are doing and bring it back. For me it was a part of my life if it goes away is like part of me is gone. I was really looking forward to see what would happen between Billy and Jane just saying what would happen doesn’t help to know more. I just wanted to say I really like… Read more »

This is why I stopped watching TV… the shows I like never stay on, never finish, or get so far away from what made me watch them in the first place that I can’t stand them after 3 seasons. I found this show on netflix and absolutely love it. The writing is solid, the actors are likable, the storyline is wonderfully interesting and I loved it so much I just stayed up and finished watching all 18 episodes one after the other. I don’t care what the ratings say… they need to figure out how to advertise on different media… Read more »

I am extremely disappointed that u have a series on and u tune ppl in and they enjoy it and then U decide we have had enough of it!!! I was lookin forward to another series of Jane and I get so tired of u guys puttin stuff on and u know ppl are watchin it all the time and u still take it off!!!! Not happy with u ppl at all right now!!!!!!!

What’s the purpose of follow a series just to watch it being shut down and all the storyline forgotten?! Sick of all those crimes scenes and policial stories. They’re really naive. With the end of gossip girl there’s a great chance that particular audience might follow this one… and be much more pleased either ’cause that latter GG half season was just a shadow of the other 5 1/2 seasons. This would amazing, fresh material for the teens… Television is too much violent and bloody for youth. And I’ll be wonder how Billy and Jane’s first kiss would be like…… Read more »