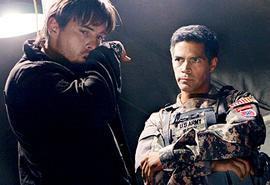 With a massive campaign, the fans convinced CBS to revive Jericho after it was cancelled last May. The network filmed seven episodes and said that, if the fans wanted more, the show would have to draw more viewers than it had in season one.

Unfortunately, that didn’t happen. Despite debuting in the middle of the writers strike when most other shows were in reruns, the drama attracted an average of 6.2 million viewers and a less-than-impressive 2.0 rating of the 18-49 demographic. Though the 18-49 average matches the ratings of former Tuesday night occupant Cane, it’s significantly less the series’ first season numbers. Many have suggested that the later 10pm timeslot is, at least in part, to blame for the drop.

Whatever the reason for the decline, CBS has pulled the plug on Jericho for the second time.

In a written statement today, CBS Entertainment president Nina Tassler said, “The March 25 episode of Jericho will be the series finale. Without question, there are passionate viewers watching this program; we simply wish there were more. We thank an engaged and spirited fan base for keeping the show alive this long, and an outstanding team of producers, cast and crew that went through creative hoops to deliver a compelling, high quality second season. We have no regrets bringing the show back for a second try. We listened to our viewers, gave the series an opportunity to grow, and the producers put a great story on the screen. We’re proud of everyone’s efforts.”

Fortunately for fans, the cast and crew filmed two alternate endings for Tuesday’s finale. One would leave us with a cliffhanger that would be resolved in season three. The second, which will actually be used, offers a bit of closure — though series star Skeet Ulrich thinks it won’t satisfy the devotees.

He told TV Guide it will leave fans “probably not too happy. [The difference is] one major scene but the others are kinda tweaked a little bit to lead to that scene that is supposed to be the wrap-up. The other version… we’ve shot some stuff that, to my mind, hasn’t been seen before on TV.”

Though Tuesday’s finale will wrap up some season two storylines, it certainly doesn’t close the door on the possibility of the series continuing. Executive producer Carol Barbee has been looking for a new home for the drama for awhile, just in case. Last month, she said, “There were other people who were interested in us to begin with, and now, I think, with the whole nuts campaign, and also with the amazing reviews that we’ve gotten for these seven episodes, I feel like we have made this franchise more valuable to a cable network who would want to take us on as a niche market.”

One possibility seems to be a natural choice. Barbee continued, “We obviously have a relationship now with Sci Fi Channel, because they’re running our previous episodes. So I think that’s a natural place to start looking… There are other people who would be interested in the show…”

Sci Fi hasn’t announced if they have any plans to continue the series but were probably waiting to see what CBS would do. Will Sci Fi or another outlet pick up Jericho, despite its high production costs? We’ll keep you posted so stay tuned!

I dont blame CBS i blame the writers who went on strike. The SAG is the real cause behind the loss of jericho. They wanted an unusually high PAY INCREASE and I dont blame CBS I blame SAG. I sure hope Sci-Fi picks this up and atleast complete the 2nd series in a better way then which it was ended, or sell the rights to someone who will…

i’m so sad and stupid i did not know that the season had ended so tuesday i was upset when the show did not record.so i went on line and low and behold they did it again CBS took it off .what seems to be the problem with those people? so i hpoe that SCI FI will pick up the show and make all the fans happy . we will miss CBS on tuesday’s.

With BSG and Jericho ending, I might have time to go out and cut my grass this summer? Really going to miss Jericho, that last episode definitely did not bring closure to the show.

Here is hopin that Sci-fi picks it up.

I had doubts CBS “wanted” Jericho in the first place. They kept pushing the “trash” of Big Brother, Survivor, and shows that I.M.H.O. degraded CBS to the point of no return. If it weren’t for Dave Letterman’s “Presidential Speeches” or “Top 10” or “Paul Schaffer and the CBS Orchestra” I wouldn’t be watching CBS at all! Jericho was my “all time favorite” seeing how CBS killed Major Dad, and Simon and Simon star Gerald McCraney “destroyed” all hopes for any season for Jericho! I believe the seven episodes was a “wash our hands looking good” pitch, shafted the series on… Read more »

My wife and I enjoy this show ant the “what if” possiblities it brings. The charecters and the plot twists keep us waiting for the next episode. If, it is not picked up for another season; we will miss the town and family “Jericho” .