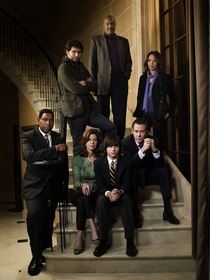 Right out of the gate, NBC has not been pleased with the performance of one of its newest serial dramas, Kidnapped.As a result, the peacock network has decided to cut the story short — but thankfully won’t leave viewers hanging.

Kidnapped is a new series that tells the story of a wealthy New York City couple (Timothy Hutton and Dana Delany) whose teenage son (Will Denton) is abducted and, the investigative team assigned to find him (headed by an ex-FBI operative played by Jeremy Sisto).

The series premiere of Kidnapped on September 20, 2006 garnered a mediocre 7.5 million viewers, losing to a repeat of Grey’s Anatomy by three million viewers. The second and third episodes dipped even lower with 6.3 million viewers each.

As a result, NBC will move Kidnapped to Saturday nights (beginning October 21, 2006). They’ve also decided to shorten the planned 22 episode order to 13 episodes. Fortunately, with such advance notice, the Kidnapped creative team will be able to make use of a contingency plan which will allow them to wrap up the kidnapping mystery by the end of 13 episodes.

It’s unfortunate that the series won’t have as many episodes but at least fans won’t be left hanging (unlike fans of last year’s Reunion series). Since NBC is still struggling for ratings and Saturday night viewership expectations are so low, it’s a pretty sure bet that all 10 of the remaining episodes will be allowed to air.

This is an AWESOME show!!!! I can’t believe this is being cancelled. Maybe if there had been some promotion on NBC’s part more people would be watching. The only reason it doesn’t have more viewers is because NO ONE knows it’s there!!!!!!

We want Kidnapped !!!! Everthing was perfect and brilliant!!! My husband and I are upset!

Don’t cancel kidnapped. It’s pretty good. Leave it on for another year.

FINALLY something worth watching on TV….and then it disappears…very disappointing. Big mistake in pulling the show. Very impulsive decision.

A real pity! Thought it was a great show – the storyline, the balance of action and personal storylines. Really enjoyed the characters…. If I have to watch one more show with a bunch of doctors and autopsies I will scream !! For heaven’s sake, garner some good will amongst your audience! This also applies to Studio60 guys, another great show ….

REGARDING “KIDNAPPED”—-YES, ITS EXTREMELY DISAPPOINTING TO HAVE THIS SHOW CANCELLED—-IT IS ONE OF THE RARE TV SHOWS THAT DOESNT TRY TO PANDER TO THE MASS AUDIENCE——-ERGO, AS A BYPRODUCT IT HAS INTELLIGENT WELL-PACED EPISODES—–THIS SHOW REQURES NO DEFINITION AS TO ITS QUALITY—-SIMPLY PUT, AS FAR AS QUALITY,I KNOW IT WHEN I SEE IT,AND “KIDNAPPED” IS REPRESENTATIVE OF QUALITY—–
—-NOW I’M READY TO CONTACT NBC PROGRAMMING —DO YOU HAVE A CONTACT ADDRESS—-

Another disappointed viewer. Without “Kidnapped” I will have more time to watch ABC.

Another disappointed viewer. Without “Kidnapped” I will have more time to watch ABC.

I think Kidnapped is excellent. It’s a great story line with outstanding actors. Put it in a good time slot and give it a chance! Try advertising it, too.

I thought the writing on “Kidnapped” was intelligent and thought-provoking. The premise was intriguing, the acting was above par, and the ensemble casting was great. Is there anything such thing as loyalty or patience in network TV anymore? The hasty cancellation of this show makes me doubt it.

I am very disappointed that you aren’t giving this show more time to gain viewership. This was one the best shows on NBC this year. I won’t be watching anything on your network for the rest of the season. There is nothing worth watching now that Kidnapped has been cut short!

I love this show!!!
The actors are doing a great job!!
NBC you only have a few good shows left , and this was becoming one of them!!!

I do not understand why you guys are cutting the show. I have been worried sick looking for it last wednesday, it’s a good show, me and my family we love it.

Common don’t do that, they are very good.

MY HUSBAND AND I ARE TOTALLY DISGUSTED AND DISAPPOINTED ABOUT KIDNAPPED ! .WE LOVED IT AND THOUGHT THE ACTING AND CONTENT WAS AS GOOD AS AN HBO SERIES. CONSIDERING THAT NETWORK USUALLY FALLS SHORT ON THOSE ACCOUNTS YOU GUYS ARE MAKING A BIG MISTAKE. YOU NEEDED TO GIVE THE SHOW A LITTLE MORE TIME . SIGNED ” TWO VERY UNHAPPY VIEWERS “

Hi can anyone expalin how to be able to sell an idea to a networksuch as NBC for a tv show idea? with out someone taking your idea from you? I have seen this show kidnapped it was so pathetically horrible as well as the previous Karen Sisco by Jason Smilovice as well for ABC why do networks even bother with such poor quality? I have a good idea and I think i can make TV very interesting. CAn you give me some insight on how to get a break?