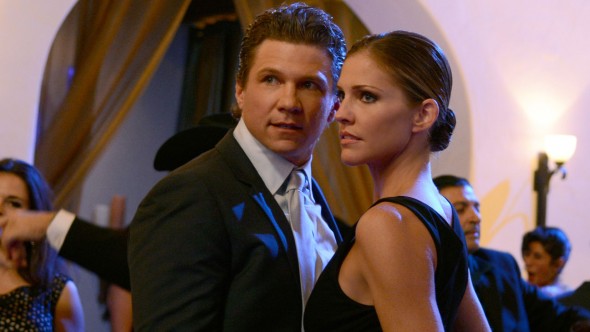 To no surprise, ABC has pulled the plug on Killer Women after one season. However, there is a bit of good news for fans of this low-rated Tuesday night series.

The crime drama debuted as a mid-season replacement on January 7th, attracting a meager 0.9 rating in the 18-49 demographic with 3.96 million viewers. As bad as those ratings were, the show’s performance would only get worse in later weeks. The network ended up pulling Killer Women after six of the eight episodes had run. The last airing drew a 0.6 rating with 3.22 million.

Though the show won’t be back fo a second season, ABC has at least released the final two episodes. “Demons” and the series finale, “Queen Bee,” can be seen below.

What do you think? Did you like the Killer Women series? Would you have liked to have seen a second season?

I enjoyed the show, just finished the series it needs to be brought back, what’s up with Molly’s ex her and Dan etc. As stated before we over 30 enjoy tv too

Just watched the first episode of killer women. I think the show had potential and I’m sad that ABC pulled it. However it doesn’t surprise, it seems that anytime the followers or cast are of Hispanic decent or speak the truth ABC can’t take it. Case in point -Cristela, last man standing, Killer women, etc. Thank God for Netflix and Amazon

I never missed an episode of that show. It was well written, well acted, and well directed. The casting people did a terrific job, and the guest stars were top notch. Of course the powers that be cancelled the show; it required attention and intelligence to appreciate it, and they really have no respect for women and men over the age of 18. I would watch it if it were brought back, but I’m not holding my breath.

Perhaps ABC should realize people over 30 watch tv also. I really enjoyed the show. A strong yet feminine lead and an unresolved story line with her ex. Bring it back.

Need to bring this show back! It’s great I just watched the whole season in 1 day!

Liked this show a lot! Really wish there was a season 2! I still watch it today!

I watch this show for the whole first season. I loved it. Many shows including The Big Bang Theory had a crappy 1st season. They should bring this show back and cancel one of the reality shows no one watches /cares about.

Just found the show, love it. I would be a faithful viewer.

I like it. The name is kinda weird. But after watching a few episodes I get it. It would great to see another episode. Definitely needs to be brought back.

This show needs to come back ASAP. Last time around it didn’t have the marketing it needed. We need this show back NOW, it’s so good. The acting, the stories, everything is golden.

Love the show. Just got up at 1am in Ireland to watch Queenow Bee. Would lovery a second season….. great show