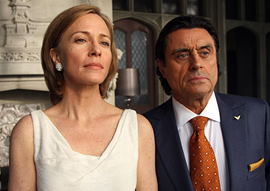 I was hugely disappointed to see that Kings has been cancelled!
I to only found the programme by accident and loved it.

I purchased all the eopisodes on playstation Network as I was addicted from the FIRST eposide I accidently ran accross. I had never heard of this show. It was never advertised and Im very dissappointed it wasn’t finished. Im starting a petition.

Love “Kings” bring it back!

In response to Don…type nbc/hulu website and then add: /KINGS to the end of that to get the entire series. I don’t understand why NBC “had had high hopes for Kings” when it was not even advertised well or properly. In addition they switch the time slots. How can you have high hopes when making these TWO CRUCIAL mistakes in promoting a show???? The biblical relation did not hurt the show because its a tale. Almost like any other movie that involves kings, queens, etc. To NBC 1. Bring it back 2. Market it, advertise it well and better than… Read more »

I too never heard of the show and ran across it by accident channel surfing late one night on cable. Was immediately hooked. Why was it never advertised? I found this blog by searching on line to see if I could find more episodes to watch, evidently not.