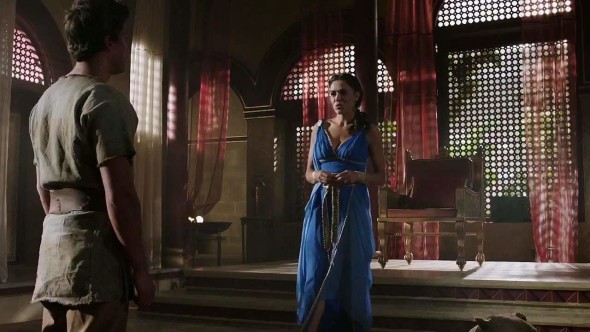 I have been thoroughly enjoying this great series. Don’t have any children, so the sex and violence doesn’t perturb me, it’s all part of life at that time, so they couldn’t very well make a series without it. The sets are very authentic and the acting is superb. Wish they would bring it back and possibly put it on later so the kids are in bed or just don’t watch it if it upsets you so much.

You know I think it’s so sad. They’re promoting gay marriage in a childrens cartoon, but don’t want to show Of Kings and Prophets. They say it’s because of the sex and violence, I can’t turn on the TV now-a-days without seeing gays,violence,and sex. If that’s the case many shows need to be cancelled. I love my Lord and I have seen many shows and movies that we’re supposed to be biblical. Besides Passion of The Christ this is the best display of the Lord’s almighty power. I feel that the world should see this show. But the world is… Read more »

Am very annoyed right now from Zambia. This series is the best have ever watched. Game of thrones 10 zero!!!!!! From this one. Please anyone with infor on where I can get even a CD or DVD

Why is it that people who have an issue with content or have any other contempt for something feel the need to drag the rest of us into it ? PLEASE STOP THIS ! just turn your TV off ~ and learn to monitor your children so you can stop depriving the rest of us from something that we have a right to decide for ourselves

Don’t know who is more stupid, PTC or ABC. Homosexuality, male stupidity, glorification of Satan are apparently okay but an effort to tell biblical history isn’t acceptable! Once Castle ends I wont be watching any ABC shows.