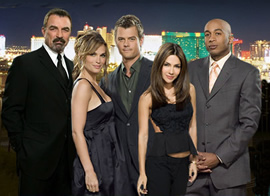 Though Las Vegas is on its way out, that’s not stopping a conservative watchdog group from taking some final shots at the NBC series.

It seems that the Parents Television Council (PTC) has a problem with the last two episodes of Las Vegas. They’ve filed a complaint with the Federal Communications Commission (FCC) over an image that was shown on the February 15th installments of the five-year-old drama.

In the opening moments of the first of two episodes, three young women gather together in the center of the Montecito casino floor and disrobe. They then begin to run around the casino, creating a distraction for some bad guys to start a robbery. As you might expect, this was filmed without showing any objectionable nudity.

What the PTC has a problem with is what they claim they can see on small casino security monitors. In a recent press release, they say that the women’s “buttocks are visible, and only shadows obscure their breasts and groins.”

In a statement, PTC President Tim Winter said, “This crossed the line of common sense decency. NBC seems eager to test the FCC’s resolve to fine stations for violating broadcast decency laws. I remind NBC that the broadcast airwaves are public property. The TV networks do not own them. The TV stations do not own them. The industry must be held accountable for the content they air and the FCC must act in the public interest by slapping NBC with a significant indecency fine.”

These fines are serious business. A few weeks ago, the FCC hit 52 ABC affiliate stations with a fine of $1.4 million because of a 2003 episode of NYPD Blue. As you might expect, NBC has had no comment on the complaint as yet.

Though the series won’t be back on NBC next season, the network will still have to pay the fine if the FCC agrees with the PTC. Could this complaint from the conservative watchdog group have had a hand in getting Las Vegas cancelled? Even if the peacock network had already decided the drama’s fate, this issue over the series finale likely ensures the network won’t be changing their mind. Stay tuned!

The best show ever in history!!! This was a REAL work of art…captured me right from the start and truely broke my heart when it ended. The show was always more than great but huge props the the creators!!! When Cooper and Piper came, the show was even more intrigueing!!!! and could have lasted for another 5++++years! I am very upset and feel a little unappreciated that you network people think that it is ok to end a show this way!! As a viewer I feel that it is unacceptable and pretty much like a slap in the face!!! Baddest… Read more »

I just watched the series finale today, I’m extremely dissapointed in the networks decision to have camcelled the show, especially mid way through something so important!!! This is absolute garbage!!! This show needs to be finished!

I guess I am not alone when I say that my friends and I are really disappointed in the way you ended the Las Vegas series. I know that we, the viewing public, have no leverage at all in requesting that you at least have a final wrap up show, but I do know this, I will not get started watching another series of anykind on your channel because of the most outrageous way you just left all us viewers hanging. No wonder you are doing so poorly in the network wars.

the best show i ever seen in my life.hope it comes back.

I am just bummed, I watched the last episode today and could not wait for the next one. I looked on line just to see when the next one would be coming on…to my amazement the show has been cancelled. This is a shame….bring it back or atleast do a final show so we are not left hanging…

I loved this show more than any other on tv and you idiot’s cancelled it in the middle of some major drama, Delinda starts bleading, Cooper walks in after his plane crashed, and I want to know if they went ahead with the weddings. YOU GUYS SUCK!!!!! BRING BACK LAS VEGAS!!!!

Glad Nikki Cox left the show. Wat was up her ever growing lips ?

WOW!!! This show was, IS the best show on TV!! Did like it bette with James Caan in it though!!

Totally bummed!! EVERY Friday, I wonder what happed to NBC’s Las Vegas???? Only to (finally) do a little research and see “it’s history”. NBC Execs gambled on cancellation – I don’t know about you, but I think they lost that bet!

u guys suck, i loved this show millions loved this show and u canceled it over some stupid barely noticeable brief moment nudity that compared to other shows its NOTHING! If lil kids watch it, its not the shows fault its the parents for letting then watch any crap they show on tv

you are idiots NBC this show was great,how many more good shows are you going to cancel first LIFE then Las Vegas.I Hate You

Loved this show. NBC………I hate you!

WOW…. NBC YALLSUCK , TO ENDA GREAT SHOW LIKE THAT, STUPID THATS WHY I WATCH FOX OR EVEN TNT (at least tnt show’s las vegas) with all the other bs thats on your channel and you take off the best show in my lifetime one word ……STUPID !!!!

I think it sucks that the peacock has cancelled Los Vegas. I work when It’s on and have to catch the rerun on T N T or hope a friend has taped it for me. I have watched the show since the start and am very disappointed that it won’t be back for another season. I guess it’s just another reason for me to watch the movie channels or find something else on cable . I can’t believe we are stuck with Jay Leno five nights a week amd don’t have Los Vegas or programs like E.R. anymore. I might… Read more »

How do you just end a series in mid-stream. What kind of idiots don’t have sence enough to finish the series and then say we’re cancelling the show. With all the foul mouth stuff on tv these days and your worried about this. Its a joke and so is your network.
Ya’ll suck!!!!!!!!!!