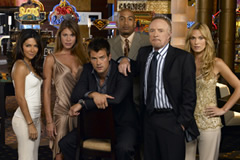 TV show description:
A dramatic comedy that follows staffmembers of the fictional Montecito Resort and Casino in Las Vegas, Nevada.

I wish this show would come back i was hooked and now i own all 5 seasons. Please rally up and bring Las Vegas BACK!!!!!!

I just re watched all the TV episodes of Las Vegas and it was left in a major cliff hanger with a caption to be continued. Now it’s been awhile and I would like this show to pick back up I read no bad reviews and no reason behind the cancellation of this show so please take a pole and start the show again

Even if it’s just a two hour special event show and give us the ending of all that was going on at that time. Was not happy to find that there was no finale

At least give us a real closure.

Well my fellow good tv watchers , we loose another go show to it cost to much out of the network pockets , reality shows don’t cost any thing to make , it all comes down to the big bucks , more money in thier pckets ,look were they live and drive . Movies today have to make 600 million opening weekend or it cost them mony . Movie houses charge use so much for soda and pop corn because the movie comp. charge them so much to run their movies . It’s all about the big bucks . Sports… Read more »

What a shambles!!! to have the last episode of Las Vegas finish with a “To be continued” and then not air any more. This just goes to show what these big TV companies think of their viewers when they can just pull out of things like this. Obviously the viewers opinions don’t come into the equation when these companies decide what to air. I think this is absolutely disgusting and I for one will not be watching anything this TV company puts out again as they seem to just cut off programmes at a whim regardless of the viewers wishes.… Read more »

I will really miss the show Las Vegas. All the characters where great. It is ashame that nothing could have been worked out to keep the show on the air. There will never be a daytime show greater than Las vegas. I really think at times it was better than allt he different daytime soaps that always payed during the course of the years. I will really miss this show. and I hope that some day they can figure everything out and get back together to get the show back on the air. I was a great show.

I would also like to find out what happened to all of the characters, (I am watching a rerun of the last episode now.) Did Danny & Delinda have a boy or girl, what happened to ownership of the Montecito…??? This was a great show with good story lines and characters. Come on, do us all a great favor and BRING IT BACK!!!!! (Thanks!)

A lot of people want it back thats why we want to fight to get it back But we really have to work at it… If they see all of the support for the show They will definitely bring it back or sell to another network… Its worth a try fans!! As much as we love the show we can actually have a comeback… I believe we can and I hope u all do to!!! The writer has assured that he would love to bring it back now its up to us the fans to help with the process Even… Read more »

I watch this show every morning before I go to work. I have never found a cast where I genuinely loved every character. I even felt connected to Molly Sims’ character because I became pregnant soon before she she did on the show. And believe it or not Tom Selleck’s character, Cooper, really helped too with his pregnancy advice. I hate how the GREAT shows always get cancelled. Seriously, what is going on in your craniums NBC??? Bring my love back! I want to see what happened to Delinda’s baby!

great show, your all idiots for canceling it

I really enjoyed watching Las Vegas! The cast was awesome and “Sam” is my idol. I want to be like her when I grow up. 🙂 I really would like to see it come back. I’m getting really tired of these damn lame reality shows! Las Vegas had some interesting story lines and I’ve been DVR’ing the shows on TNT. The last episode was a complete disappointment. It would be wonderful if there was at least a reunion show that tells us what happened. ….maybe a two part mini-series showing us what happens to each of the cast members, including… Read more »