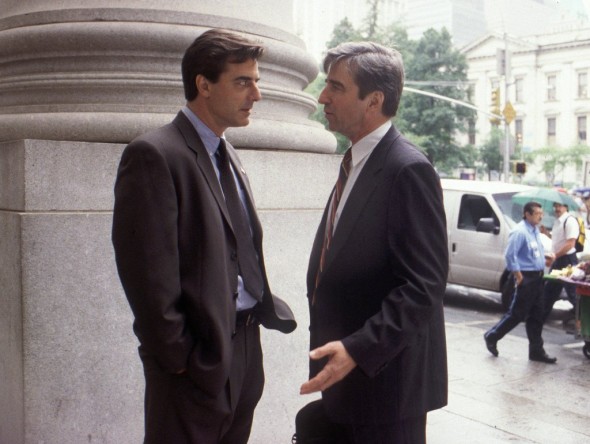 Deadline reports that NBC is considering reviving the original Law & Order series for a limited run, as they’re doing with the Heroes 13 episode mini-series.

Network sources note that the idea has been floated in the past and the idea is not currently in active development. Several past castmembers have been approached about potentially taking part — including Sam Watterson and Chris Noth. Word is that there would likely be 10 episodes.

While Law & Order: SVU was just renewed for a 17th season, NBC cancelled the original Law & Order back in 2010 without allowing it to have a proper series finale. This limited run idea would be a more fitting ending for the 20 year old venerable series.

What do you think? Would you be interested in watching a revival of the original Law & Order series on NBC?

Please bring it back. I love the old shows and would love to see new ones.

Too bad they can’t bring back Lenny Briscoe or Claire Kincaid. But would love to see returns by Paul Sorvino, Michael Moriarty and Steven Hill. But Noth and D’Onofrio would be a fantastic pairing for at least a few cases.

of course they are considering it, NBC is out of ideas. they have to do a pepsi throwback

Definitely yes! I watch all of them. Please consider bring this & Criminal Intent back. There are no good real dramas on tv anymore.

Yes, yes, yes, a thousand times yes. However don’t make it a limited series I want it back permanently. Really want both Sam & Chris back along with the same ‘coroner’ & anyone of the ‘ shrinks’. I have watched reruns of old original L & O’s all the time. So Yes please, from this long time fan!!!!!! You just made my day!!!

Oh, and Leslie Hendrix and Tamara Tunie and B.D. Wong also need to be included. And Belzer, of course!

YES, YES, YES! Love L&O since the start. But bring it back for a while not just a tease. Hope Sam Waterston, and others return, as said LOVE this show and was sooooo disappointed when you cancelled it.

Yes, I like all of the Law & Order Series, but especially love the SVU. I would like to see all of the series!

Yes, please bring it back so it can at least have a proper finale!!!

Absolutely! I keep watching all the repeats on other stations. Bring it back!!!!

They gotta do this.

They have all been great!

I would love to see this happen!

Yes yes yes!! I would LOVE to see a new revival of the series. I’ve just become a fan through reruns so this would be a great way for me to see the series with new episodes as a new fan of the series.