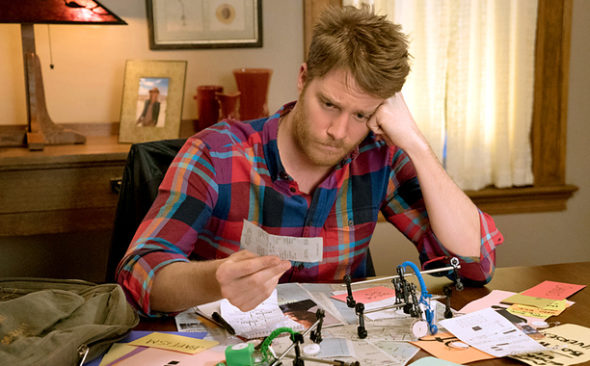 Tonight marks the last episode of the first season of Limitless on CBS. Will it be the series finale as well? Should this drama be cancelled or renewed for a second season?

On Limitless, deadbeat Brian Finch (Jake McDorman) is given the NZT-48 drug and it unlocks 100% of his brain. Brian has complete recall of whatever he’s learned at any point in his life, either consciously or subconsciously. The FBI want to use him to help solve crimes but they’re not the only ones interested in Brian and the drug. The rest of the cast includes Jennifer Carpenter, Mary Elizabeth Mastrantonio, Hill Harper, and Colin Salmon.

The series debuted on September 22, 2015 and attracted a 1.87 rating in the 18-49 demographic with 9.86 million viewers. It was a positive start, perhaps in part due to an appearance by Bradley Cooper who reprised his role from the Limitless feature film. The show’s ratings dropped a bit but were pretty healthy for the rest of 2015.

The numbers saw a nice boost when the show returned from a mid-season break on January 5th (Cooper reappeared) but hit a new low the following episode. The ratings have have been trending downward in 2016 — save for episode 19 when Cooper put in another appearance.

In March, CBS head Les Moonves said that he expected five of the network’s freshman shows to be renewed for the 2016-17 season — but that was before Limitless’ numbers fell as low as a 1.05 in the demo with 5.6 million. The network has yet to renew any freshman shows.

In the end, I suspect that the network will renew Limitless for a second season but the past few months’ ratings declines certainly don’t help the show’s chances. We may have to wait until next month to find out what CBS will do.

But, what do you think? Do you want to see more of the Limitless TV show? Cancel or renew for season two?

It’s a good show and it should get a second season and that’s probably why it won’t.
Whatever you do please God not another make Believe reality show.

love the show should renew it. my family watches together and we love the show haven’t missed one episode since airing. has a wonderful story line for first season and can’t wait to see how it would continue in second season with a team to work with this group of wonderfully placed caracterss

I love watching limitless it allows the mind to run wild thinking of what is going to happen or has already happened and will flash back to. Hoping it is renewed for a second season love tuning into this show to watch something I really enjoy on t.v. instead of something that has been way over done and repeated many times.

I will not watch unless they bring back Sands. The show grew on me after a few episodes. Tonight’s finale was disappointing. I expected more and they made Sands character too weak considering how he was always two steps ahead. I would like to see a second season.

Won’t watch next season unless Sands come back. He was the only reason I watched it. Great actor.

I love the show!!! Love the cast they all work together so good!! Please renew for season 2!!

*SPOILERS*
Considering the way season ended, with Brian getting a booster shot that provides him with life time immunity from NZT side effects, I sadly do not think the show will be renewed. It will just become another criminal minds or csi show. Do not get me wrong, I love the show, want it to ge renewed and love shows such as CSI, however the repetitiveness of it likely will prohibit it from getting renewed.

Love the show, bring it back

Of course the ratings weren’t wonderful. They sabotaged the show with its downright bizarre airing schedule.

Like this show because it’s different, has a story and it’s funny. Please renew!

Limitless is a good show. It has humor along with good plots, something most tv shows lack. It is also a show all of the family can watch.

if this show had gone head to head with Chicago Fire from episode one, it would be cancelled. Fortunately, it went against the Neil Patrick Harris Debacle for a bunch of weeks, and it received high enough ratings so that its average rating for the season is too high to cancel. The fans lucked out. There should be a season two.