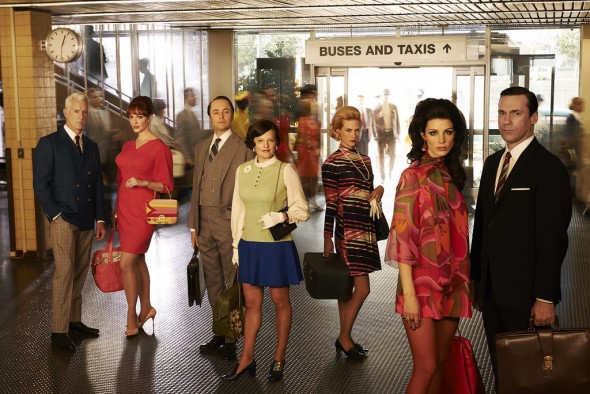 AMC has announced the return of Mad Men. The final seven episodes will begin airing Sunday, April 5th, at 10pm.

“What an incredible journey this has been. I take great pride in what the entire ‘Mad Men’ team was able to create episode after episode, season after season,” said Weiner. “We sincerely thank the fans for joining us on this ride and hope it has meant as much to them as it has to us.”

“‘Mad Men’ is the show that put AMC on the map. Period. It is impossible to overstate the impact it has had on AMC, and I would argue, this era of television,” said Charlie Collier, AMC President. “We are honored to forever be the birthplace and home of this iconic series and we can’t wait to share its artful conclusion with the fans. From the first shot, Matthew, his cast and crew handcrafted something truly distinctive for the screen, the very definition of premium television on basic cable. We will miss the remarkable people, the consistently exquisite program, and of course, the free scotch and cigarettes in our vending machines.”

“‘Mad Men’ surpasses our highest expectations year after year and these final episodes are no exception as the fates of its characters are ultimately revealed,” said Kevin Beggs, Chairman, Lionsgate Television Group. “Thanks to the genius of Matthew and all the extraordinary artists on both sides of the camera, the series has raised the standard by which all dramatic television is judged. It’s had a profound impact on popular culture, as well as the evolution of Lionsgate’s television business, and is an incredible gift to all of us.”

Fans looking to catch up on “Mad Men” can set their DVR every Sunday morning beginning at 6:00am ET/PT. For a full schedule of the Sunday morning marathon, visit http://www.amctv.com/.

What do you think? Are you looking forward to the final episodes of Mad Men?

Can’t wait to see how it all ends.