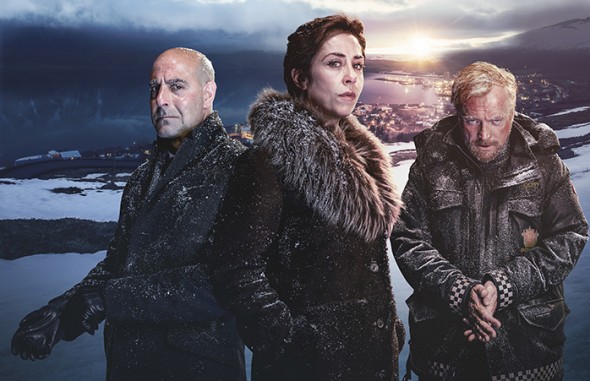 The dark drama series set in the melting Arctic, featuring psychological and thriller elements, tells the story of the small idyllic town of Fortitude, whose peaceful existence is shattered after a brutal and shocking murder. Above-average temperatures lead to a record ice melt revealing secrets long since hidden beneath the frozen landscape. Sheriff Dan Anderssen (Richard Dormer) leads the investigation and is forced to work alongside DCI Morton (Stanley Tucci), a detective who has flown into town from the mainland to contribute his forensic expertise. As the search for the killer progresses, their list of suspects – and suspicions of each other– grows.

“For our first foray into scripted drama, we wanted to find a world that is intriguing and distinctive, and one that can highlight issues in an unexpected way,” said Belisa Balaban, EVP of Programming. “Fortitude spins a dramatic thriller around the unique characters who are drawn to this Arctic community, and a complex story around the potential unintended consequences of man’s impact on the environment.”

As part of one of the world’s leading broadcasters, Sky Vision leverages relationships with global media organizations to fully exploit programming across all media platforms. The company works closely with the commissioning team at Sky as well as independent producers across the globe to build a catalogue of quality and scale.

About Pivot
Pivot (http://www.Pivot.tv) is a television network from Participant Media with a diverse slate of original series, acquired programming, films and documentaries. Pivot focuses on entertainment that sparks conversation, inspires change and illuminates issues through engaging content and, through its websiteTakePart.com, connects audiences to a wealth of content and customizable actions. Pivot is available in 47 million homes via major cable providers and offers subscribers a live and on-demand streaming option via its interactive, downloadable Pivot app. Follow Pivot on Twitter at @pivot_tv and on Facebook at http://www.facebook.com/pivottelevision.

Participant Media (http://www.ParticipantMedia.com) is a global entertainment company founded in 2004 by Jeff Skoll to focus on feature film, television, publishing, and digital content that inspires social change. Through its films, social action campaigns, digital network, and its television network, Participant seeks to entertain, encourage and empower every individual to take action.

What do you think? Do you plan to check out this new series on Pivot?

This is really a winner!

Love, love, love the show!! Please let there be more seasons. So unique!! Get so tired of the same old recycled stuff on TV these days, so it’s really great to see something with a new twist.

I have been keeping up with this show on On Demand. I first saw the name and was intrigued, so I took a look. I am still intrigued. Very different setting and a very dramatic group of characters with an unusual plot. Thanks for a nice change.

Watched the first offering On Demand through my cable company and was impressed. Looking forward to more pieces of the puzzle!

Yet another network I have never heard of, nor likely will ever look at.