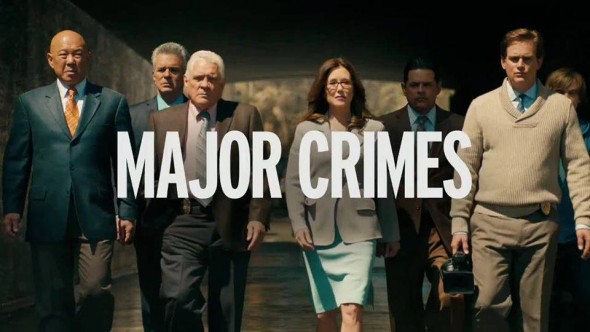 Major Crimes has added to its cast for season six. James Martinez, who has appeared on House of Cards, will recur on the drama. He joins Mary McDonnell, Tony Denison, Michael Paul Chan, Phillip P. Keene and Raymond Cruz.

Deadline revealed the following about the TNT drama:

“Martinez will play Ian Nunez, the sociopathic father of a potential kidnap victim, a man who started a second family without ever informing them he had a son from another marriage.”

Martinez has also appeared on One Day at a Time on Netflix. That series has been renewed for a second season.

Are you a fan of Major Crimes? Tell us what you think.

Best crime show on TV looking for it to begin

I really enjoy this show and the cast, with exception of the character Rusty. They need to drop him, he takes away from show. His character is unnecessary, Mary McDonnell is excellent in her role, as well as G.W. Bailey.
A really good show I love to watch it.

Love the show. I even watch the reruns. Fantastic show. Not crazy about the gay parts.

I love Major Crimes.. can’t wait for the new season to start…

Love love this show. Love the characters and the story lines. Don’t change a thing. Thanks for coming into my house. Looking forward to the new season.

Yea, glad it’s coming back. My favorites are usually canceled.

Love the show. Very human. Seriousness, with humor, along with personal lives of the cast. Their problems, and joys, sort of become your own. I can’t wait for it to start up again. Thanks to the entire cast. They are great.

Great acting w witty sarcasm. Great developing characters in the show. Makes me want more.
My wife loves the show too. She loved the closet too.
Mark and Carli Pascale

I love that whole cast! especially Raymond Cruz they can get rid of Rustys character he takes up a lot of time fill it with more Adventure.

I’m so please to know “Major Crimes” is returning. I thoroughly enjoy each series.

My husband and me watched all the seasons is out favorite program. Everybody is very good. We hope won’t cancel it. Please

So glad you are bringing back “Major Crimes” for a sixth season. I only care about three television shows and “Major Crimes” is number one of them. When is it coming back??

Thoroughly enjoy “Major Crimes, hope it continues for more seasons. I like the “puzzle” part, the characters, and the stories. Not “mindless entertainment”.

Can’t wait until Major Crimes returns! Love the characters and their interactions. Hope it keeps coming back!

Love this show always anticipate every new season. Great cast, great storylines. Need more shows like this. Do not Cancel or End it please. Can’t wait for new season.