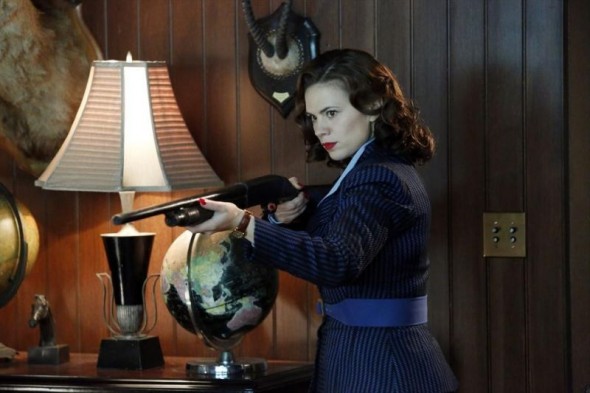 ABC had very high hopes for Marvel’s Agents of SHIELD. That series underperformed in the ratings in season one and has done even worse in season two. Has Marvel’s Agent Carter done any better? Should it be cancelled or renewed for a second season?

The series had an okay start when it debuted with a pair of episodes on January 6th. It attracted a 1.9 rating in the 18-49 demographic and 6.91 million total viewers. Unfortunately, the ratings dropped about 25% in week two and fell another 10% in week three. The numbers have come up a bit since then but they’re still pretty low. Last week’s installment drew a 1.4 in the demo and 4.15 million.

Agent Carter is averaging a 1.5 in the demo and 5.16 million. Agents of SHIELD has been averaging a 1.7 rating with 4.77 million in the same timeslot.

Disney — which owns ABC and Marvel — may find value in keeping the series around because it’s tied in to movies and other projects. Based on the ratings alone, ABC doesn’t have much incentive to bring Agent Carter back for a second season.

It should be noted that ABC promoted Agent Carter as a limited series. That means that the season has a limited and set number of episodes (less than a typical season) — not that the series will only have one season. Executive producer Louis D’Esposito has indicated that he has plans for a second season if the series is renewed.

If Agent Carter does have only one season, hopefully fans will be satisfied with how the finale ends.

But, what do you think? Do you like Marvel’s Agent Carter? If you ran the network would you renew it for a second season, try another Marvel property, or try something else completely new?

Most definitely I’d keep the show going. Even the first short series has me wanting more! Disney and ABC, go for it!

My wife and I really liked the show, we are in our 20s. We both loved the marvel movies and believe that Agent Carter helps to fill in the years between the two Capt America movies. We also love the character Peggy Carter and would be upset if the show was not renewed for another season.

Absolutely, I would like to see this series return for a 2nd season. Very well done and intelligent.

I love . both shows , yes ” Agent Carter ” Is the one I prefer , as I stated in my April the Fifth comment.

Agent Carter is far more unique most series ,than contemporary based shows . The Production design depicting the 1940’s amazing for commercial television, and depicting the sexism of that period , with younger audiences would not understand , I hope ABC will give another season and soon .

Loved the show and storyline. Bring it back for another season

I love this show.
.bring it back.

Good show. They should bring it back and give a chance.

I Loved the show..I really hope they bring it back for season 2.

I love the show ..Please bring it back for season 2.

Love the show. Don’the forget that the baby boomers are soon to be the biggest senior population and it brings back memories throughout the seried. Bring it back or lose your baby boomers.

Please renew the show. Good writing, great acting, fantastic story, and so much promise for more!

I loved the show. Please bring it back.