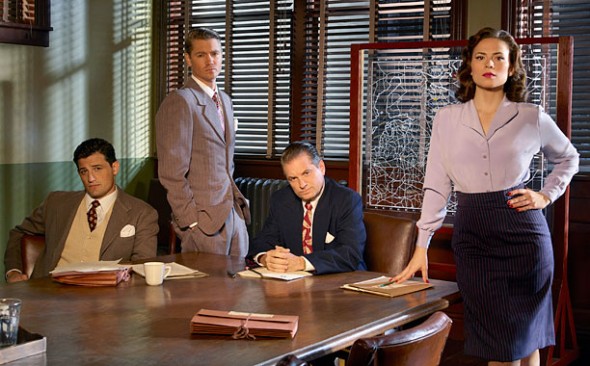 TV show description:
This adventure TV series takes place in 1946 and follows a character previously seen in movies (like Captain America: The First Avenger) and the Marvel’s Agents of SHIELD TV show.

Agent Peggy Carter (Hayley Atwell) is tough, smart, sexy and very good at her job at the Strategic Scientific Reserve (SSR). Unfortunately with the war being over, she finds herself being marginalized as the men return home. following the end of World War II.

While still dealing with the wartime loss of her boyfriend, Steve Rogers, she secretly assists her scientist friend, Howard Stark (Dominic Cooper), when he gets into trouble. Peggy is aided by Stark’s butler, Edwin Jarvis (James D’Arcy).

Agent Jack Thompson (Chad Michael Murray) is the SSR’s golden boy — and Peggy’s office nemesis. A celebrated war hero, his rough tactics and stubborn attitude are his greatest weapons. He underestimates Peggy’s abilities and place in the SSR but steadfastly believes in the organization’s mission.

Like Peggy, Agent Daniel Sousa (Enver Gjokaj) is overlooked at the SSR because of a perceived shortcoming — a war injury to his leg that’s left him with a permanent limp. Limited by his disability, Sousa must rely on his wits and intellect and becomes the real brains of the outfit.

After earning his stripes with the SSR during the war, Chief Roger Dooley (Shea Whigham) returned home and was appointed chief of the New York Bureau. He knows how to get the most out of his agents and will do everything he can to protect them. Ultimately, his good instincts and nose for the truth make him the perfect man to lead this group of war-torn agents in a post-war world.

Series Finale:
Episode #18 — Hollywood Ending
As Peggy, Wilkes and Howard come up with a game plan on what to do with Whitney Frost, Joseph Manfredi (guest star Ken Marino) pays a visit to Stark mansion, much to everyone’s surprise. It turns out that Howard’s old friend needs some assistance with Whitney, who refuses to stop working and leave her room. Later, with Manfredi’s help, Peggy and Sousa sneak into Whitney’s room to get clues on her next steps.

While waiting for Whitney to show up, Thompson confronts Peggy about turning him in once they get back to New York. When Peggy assures him she wouldn’t, he presents her with an Arena Club lapel pin – that is actually a key – that he’d found with Vernon Masters’ belongings. What the key is for, they would have to figure out.

As they had predicted, Whitney arrives with her eye on one thing: the rift. As she heads toward the rift, Howard uses the gamma cannon and zaps Whitney, causing the Zero Matter out of her and removing her powers, including the scar on her face. A powerless Whitney is devastated and is promptly arrested.

Although Whitney Frost situation has been taken care of, there’s one other problem: the rift is becoming unstable and needs to be shut down. With the gamma cannon recharging, there’s just one way to do that and it involves someone getting sucked into the rift. While Peggy, Howard, Wilkes, Jarvis and Thompson make cases as to why they should be the ones, Sousa slips by and sacrifices himself. The gang fights to save him and, thanks to a sacrifice of one of Howard’s cars, they’re successful.

Still devastated at the outcome, Whitney laments her problems to her husband Calvin Chadwick. Calvin encourages her to keep looking and assures her it will be okay. Whitney expresses her appreciation for Calvin… to an empty room. Their exchange is all in her head as she is actually in a psychiatric facility, talking to herself as she looks out the window.

Peggy closes the case with Sousa at the Los Angeles SSR office before heading back to New York. Sousa addresses what happened at the rift, reprimanding her for her reckless actions and saving him. She responds by kissing him… finally.

As Thompson prepares to go back to New York solo, he answers the knock at his hotel room door. Whoever is at the door takes him by surprise, shooting the chief and killing him. Who shot Thompson? (Courtesy ABC.)
First aired: March 1, 2016.

What do you think? Do you like the Marvel’s Agent Carter TV show? Do you think it should have been cancelled or renewed for a third season?

My son and I really enjoyed this show. We do not want it cancelled. Please put it back o

Agent Carter is a great series and I would like to see it continue for many years.

Renew renew renew
Listen to the prople and renew this series

Nothing else to say than RENEW IT!!!

Renew this show! My wife and I love it!

renew please. good show and cast keeps you waiting for the next sow

Do not cancel Agent Carter. This is a great show. It is very entertaining. Please renew this show.

I haven’t enjoyed a show this much in years please renew it for a second season…they don’t get any better than this!

yes I think it should be renewed I like it better than agent of shield. they are killing off the main actors or either make them killers or crooks they have ruined it so yes I prefer agent carter