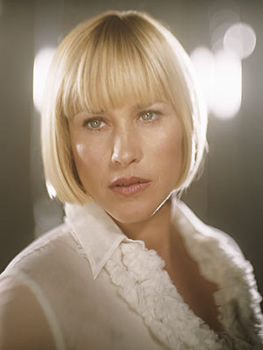 Though CBS hasn’t admitted it, it’s being assumed that Medium has indeed been cancelled. The venerable drama has been down in the ratings this season (though it often ranks first in the 18-49 demographic for the timeslot) and CBS cut the season order from 22 to just 13 installments. That’s never a good sign. Just ask the folks from Numb3rs when a similar thing happened to them last year.

Over the weekend, Medium star Patricia Arquette was at an event and told EW that the show was indeed cancelled.

The cast has two more episodes to shoot before they wrap and Arquette said, “I was trying to get information from the writers about the last episode… I don’t know what it’s going to be, but they’re really excited about it. They’re like, ‘we’re just going to burn the whole thing down!’ I’m really excited.”

The actress isn’t looking forward to the show ending but said, “It’s been a great time. I love that time in my life.”

What do you think? Is Arquette correct or will Medium beat cancellation once again and return for season eight?

I wish they would reconsider cancelling my favorite show. Just when I have the time to enjoy it they are discontinuing it! So sad!

I really enjoyed MEDIUM, each and ever season.
All good things must come to and end, though, and reading the chatter regarding the abrupt ending, I have to say that I LIKED the ending. Reading the credits at the end that the REAL Allison and Joe family were alive and well made me happy. Very good show. I look forward to watching many reruns on my iPhone in the future. God gives everyone gifts. I enjoyed all of the actors, too.

Very sad to see Medium end. I really enjoy shows that are intelligently written, ones you can’t predict, that don’t depend on crass or stupid jokes to carry the show. There are very few shows that I enjoy. I am down to two and they aren’t on CBS.

Too darn bad. This was such a well written, multi-dimensional drama that was loads of fun to watch! What is CBS thinking.

Augh – this was the best representation of a loving couple and family on TV. I am so sad after watching for all these years. Decisions like this as why CBS is never the #1 Network.

It should’t be over

I cant believe the show ended–i had no idea this was coming. we have over 300 channels and now there REALLY isn’t anything worth watching!!

very very upset that the show was canceled love it never miss a shot, what is patricia going to do now, I hope she will do more diffrent shows I love her

I am disappointed to see that CBS cancelled Medium. CBS has become so Republican and Conservative in nature that it is not surprising, however. I long for the days when it was a network one could count on for integrity, e.g. back in the good old 60 Minutes days of strong investigative reporting. Now, we see only yellow journalism. So sad to lose so much that has been of such value to so many.

I was not happy at all with how Medium ended. I love watching Medium on Friday nights I have for years.I understood why it had to come to an end but I truley believe they could have done a better job. CBS stinks at bringing shows to an end. Anyways I was just wondering if anyone else feels as I do about the horrible ending of medium. I was truley unsatisfied and I will miss watching Medium.

My daughter and I were very upset and did not know that it was going to be the last show. It bonded us together every Friday night watching this realistic family that we could identify with, i.e. school problems, etc.

I can’t believe they cancelled – it was my favorite show – I suppose family life shows just aren’t making it – isn’t that saying a bit about the “crap” that’s on TV now a days. The acting was fabulous with the 3 girls. Really a shame!

I am so sad about this show leaving. It was the one show I could watch without a predictable plot. The last episode took me by surprise, I did not know it was ending…left me very, very sad. … although I do think the writers did a good job writing an ending.
I will miss this very much.

It was a horrible job for an ending — they could of cancelled it having them been a happy loving family keeping them all young just the way there were — so we all could of felt happy instead of that sad feeling we were all left in shock with.

Very sad that Medium was cancelled, there is not much on TV that I like and Medium was one of the few shows left that I loved and look forward to watching. The family was normal, the love felt real, the story’s were great. Most of the shows you could believe it could really happen. The chemisty of the family worked. They did not over act, the family looked like people you would see in any neighborhood, not just the rich and famous. The shows that are taking over TV are truly stupid. Pretty soon I will be cancelling my… Read more »

Cannot believe Medium was cancelled…so sad that the network made this decision, one show my husband and I looked forward to on Friday nite, if not home, recorded it…reality shows are truly stupid and worthless!!!! Shame on CBS…