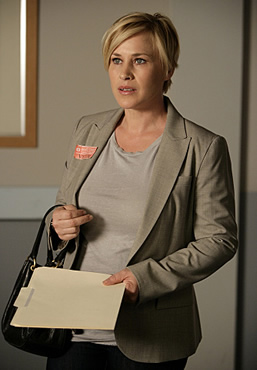 We already know that the last episode of CBS’ cancelled Medium series will take place in the present, seven years into the future and then 40 years after that. The network has now issued a press release that gives us a few more clues about the TV show’s conclusion. Note that Sasha Pieterse is credited with playing a 14-year-old version of youngest daughter Marie (Madison Carabello).

It’s also worth noting that this is the first time that the network has officially confirmed that the series is ending. Up until now, we’ve only heard the cancellation news from star Patricia Arquette and executive producer Glenn Gordon Caron.

ALLISON AND JOE BEGIN NEW CAREERS THAT TAKE THEM IN DIFFERENT DIRECTONS, ON THE SERIES FINALE OF “MEDIUM,” FRIDAY, JAN. 21

“Me Without You” – When Allison becomes a lawyer and Joe starts a new job, the Dubois family is forever changed, on the series finale of MEDIUM, Friday, Jan. 21 (8:00-9:00 PM, ET/PT) on the CBS Television Network.

I have had it with networks cancelling excellent programming. I will greatly miss Medium. I looked forward to watching the show every week.

I had the opportunity to see the real “medium” and she is a scary and cold hearded woman! She is a fame seeker who doesn’t care about other people’s feelings. I am glad this show is cancelled, that women is a terrible human being.

I, too, am a fan of Medium and am very sorry it is being discontinued. There are so few programs on television worth watching anymore and the networks continue to fill their slots with “reality” tripe and nonsense. That, plus the fact even the half-way decent shows are unexpectedly repeated, it’s impossible to know when, or if, the next episode is new or not. Fine, take off good shows and replace them with reality garbage… I’m reading books more again, which don’t even have commercials to contend with.

i totally find it disgusting that they canceled such a unique and wonderfully bright series. They keep canceling shows with positive ratings which means who ever does their programming must have biased reasons. I smell something fishy going on like a power hungry program manager who must have alterior motives. Do you remember when Sons of Thunder got canceled? They must hate shows with high values and morals. I think if we could pay for each channel individually instead of with package deals, then stations would be more competitive and less lazy.

I’m quite sad Medium has been cancelled. I really like this show and I thought a lot of the story lines were creative. I don’t watch reality tv, so I’ll have to look up the clip everyone’s talking about. Sad that Medium is taken out of my favorite Friday night line up. Please, please don’t think of canceling Blue Bloods; the writing is good for that show, great acting. I can’t stand “reality” tv.

I cannot believe that Medium is cancelled. You leave on terrible shows and cancel a great one. Some of your audiences must be very narrow minded and you are listening to them. I hope there is a way to change your decision or that another network like cable picks it up.

Wow I just watched that clip on HWof BH. Who cares? They are all acting stupid, pretentious, totally middle school, full of themselves, nasty, petty, etc. I don’t care if the person who inspired MEDIUM was actually a gazelle. It is still an incredible show, and it should not be discontinued. That clip made me embarrassed to live in the same country as shallow ugly people like that. However, the show is still beautiful, timeless, awesome. Let’s keep the show on and maybe it will improve those women and help them grow up and be more real and develop more… Read more »

This was my favorite show ever, and a great example of uplifting TV that showcases intelligence, goodwill, character and moral fiber, serendipity, humor, and family values. I would beg for this show’s continuance, but I doubt it would matter. I abhor whomever took this show away from me and the millions of fans who watched it religiously. And to be replaced with reality TV? What a joke. I wouldn’t watch reality TV unless it happened to be playing at my neighbor’s already, and I had some other reason to be there. What an absolute crime, first depriving us of the… Read more »

I will also miss this family, forget the reality of the real person, this was of series of family love and sacrficies, I never missed, I hv had enough of reality on tv & my own life, I want see ,Biwitched, Jeannie,annd Allison and family, tv just gets worse.

I completely agree with Sarah and Tami. Medium was always a fairly entertaining show to watch (except for Patricia Arquette’s mispronounciation of of her boss’ position; Mr. Distric Attorney) with other than cookie-cutter stories. After seeing Allison DuBois on Housewives with that wining, long-suffering Camille, I would probably not have continued watching. I was surprised at how rude, vulgar and classless one could be on t.v., and she only served to help Camille make the once respected Kelsey Grammar look like a fool for even associating with such vapid women. Good for Kelsey for walking away!

I saw her on the episode of the Housewives of Beverly Hills this past weekend, too. I am wondering if this got into the hands of CBS people, or in the ears of CBS people who know members of the HWOBH people? I mean, they say that Beverly Hills is a “small town,” and I am wondering after the debacle she created, word got around and her show, “Medium” mysteriously got canceled by CBS prior to this episode airing. I was in shock and greatly disappointed to see her act like that, and no, I do not think it was… Read more »

I personally wouldn’t have watched this show again after seeing ‘the real” Allison Dubois on the Housewives show. She was absolutely horrifying, sucking away on her electronic cigarette (what?) as well as swilling down one drink after another, all the while spewing out nothing but hatred (and generous use of the F-word – classy) towards the other women. I could never have an interest in anything to do with her again. Obvious fake. A Google search confirms that none of her so-called credentials have been validated. Good call, CBS. I wonder if that disgusting spectacle has anything to do with… Read more »

Can’t wait till I read or see on TV someone who will drop Allison Dubois a few peg so she can wake up and see that she is most defiantly all that she thinks she is…and she is def. not as pretty as Patricia Arquette matter of fact even though Allison is not that attractive, its a shame her real personality makes her even uglier!!!…Yes people I thought I would never say something like this, but I wish I could watch this woman be exposed for the fake and the phony she really is!!!

Well, CBS is going to lose me again if they keep canceling shows I like… I just hope ABC has a better lineup or I may be going totally cable networks (ie: TNT, USA). I do not know very many people who actually watch or like reality TV, so I don’t know where those ratings are coming from. Or is it the youth of today that is so gullible to think that crap is actually REAL? lol at those idiots! And they are the future of this country… so sad. CBS, wake up and stop being a follower… leave the… Read more »

I wonder about who’s running the networks these days. They cancel Cold Case and The Medium and come up with “Skating with the Stars”!!!!!!!!!! How stupid do they think we are????? I for one am sick and tired of Reality TV that has nothing what-so-ever to do with Reality!!! They just don’t feel like paying for talented script writers so they’ll put any kind of crap on TV that they think we’ll swallow. I for one will be watching alot LESS television from now on.

This has been one of my favorite shows and although I’m sad to see it go I do not feel the same about the show after seeing the ‘real’ Allison Dubois on the show The Real Housewives of Beverly Hills. She wasn’t a pyschic; she was a WITCH. She was nothing like the character and I can only hope that she gets something from Patricia’s likeable portrayal of her on the show. I will never feel the same about ‘Medium’ again. That woman just totally ruined it for me.

C’mon people Allison Dubois IS A FAKE!!!…We will never watch anything that this woman or her husband are a part of, so they better use fake names..As for Allison Dubois, we here all think legal authorities should do something about her and the families whos lives she hurt, they should be compensated by the Dubois family, because ALLISON AND JOE DUBOIS ARE FAME MONGERS,MONEY TAKERS,PSYCHIC FAKES AND JUST OUT RIGHT LIARS!!!

I am saddened to learn that the show “Medium” will be ending, as well as the fact that the end seems to be destruction of the wonderful Dubois family. This has been my favorite show for years. I love the actors; I love the characters; I love the story lines.

I LOVE this show too 🙁 I hope they change there mind like they did with One Tree Hill:)