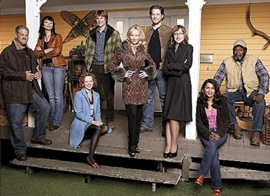 After being ping-ponged around the ABC schedule for two years, the network has cancelled the series about Marin (Anne Heche) and the residents of Elmo, Alaska. In retrospect, the writing’s been on the wall for awhile.

When Men in Trees premiered in the fall of 2006, it attracted a respectable number of viewers. Unfortunately, the show never seemed to be a priority for the network — possibly because it’s not produced by ABC’s in-house production company. Though its viewership was slowly growing, the TV show’s first season was cut short due to ABC’s scheduling of October Road (which is produced by ABC Studios). Instead of airing all 22 episodes, the network opted to air just 17 and added the remaining five episodes to the series’ season two order, in preparation for a possible writers strike.

When the writers strike hit in November 2007, it was expected that Men in Trees would benefit from the lack of original scripted programming on network television. That never seemed to happen and the series was put on hiatus in December. It returned once the strike was over in February and ABC cut Men in Trees’ second season order to 19 episodes, including the five from season one.

There series is on hiatus once again and isn’t scheduled to return until after the May sweeps period is finished — a sure sign that a network has lost faith in a series. ABC sent tapes of both Men in Trees and October Road to Lifetime to see if they’d be interested in taking on either series. They weren’t.

To little surprise, series creator Jenny Bicks was informed of the Men in Trees cancellation last week. She lamented to TV Guide, “I wish the show had not been moved six times and put onto two long hiatuses. No show could survive that.”

She says, “I am really proud of the work we did on MIT… A huge thank you to our supportive fans.”

On the positive side, Bicks realized that the series might not be back for season three and the cast and crew did some extra filming. As a result, an alternative ending for this season’s finale was filmed to serve as a series finale.

Men in Trees is scheduled to return to ABC on May 28th. If the network lets it remain in that Wednesday night timeslot for three episodes, the series finale should air on June 11, 2008. Based on the network’s track record with this show, it’s hard to say if that will actually happen. Stay tuned!

It’s 2019 and I’m still so upset that this show was cancelled! Such a great show. Somebody, please bring it back.

I loved this show and it was very shortsighted of ABC to not give it a chance. Regardless of it being an ABC production or not, it could have made money off of it and won more fans and viewers for other offerings. Such a smart show – mature and interesting.

It’s nice to see I’m not the only one who hasn’t gotten over Men in Trees after 10 years. No show I’ve found compares to MIT…

We’re in 2018 and I still haven’t gotten over he cancellation of this amazingly entertaining, heartwarming, smile-inducing show. 10 effing years and I’m still pining for more episodes. And I can’t even find any replacements; none of the suggested alternatives I find online are even remotely similar to Men in Trees. BIG SIIIIIIIGH…

P.S.: By all means put out yet another detective show. We need a couple hundreds more…

I loved ” Men In Trees”. Now that it was cancelled. Where can I get all of the Episodes of it to watch over and over??
I can not find it anywhere on DVD.

loved the show was extremely disappointed when it was shelved – I have googled everywhere to try and get it on DVD and apart from a few snippets on youtube have been unsuccessful in finding both seasons – if anyone has info on where I can get the dvd’s would be grateful, I am in the UK.

I just finished season 2 episode 19 and I’m so disappointed how things ended. When the show was on back in 2006-2008 I missed so many episodes because I never knew the day or time the show was being aired. Then comes the long hiatus, followed by the frigging writer’s strike. At least I can watch MIT and so many other great shows any time I want to now @ thewatchseries.to.