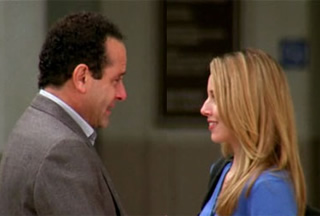 After eight seasons on the air, Monk is finished and the last episode has aired. The mystery of Trudy’s killer has finally been solved and Adrian Monk (Tony Shalhoub) has found some peace.

Still, many people aren’t quite ready to let the characters go and would love to see them return in one or more reunion movies. The cast of the USA TV show are open to the possibility as well.

Shalhoub told the Boston Herald, “We’ve talked about a Monk feature. We’ve been talking about that for a long time. The cast would love to do it. But there’s really nothing hard and fast in the pipeline.” In another interview, he concluded, “I never say never.”

The last episode ended on a positive note and gave some closure but certainly leaves room for new Monk stories. If there were going to be a reunion movie, are there any issues left unresolved that you’d like to see addressed? A story idea? Perhaps some threat to Molly?

What would you like to see happen? Or, do you think there shouldn’t be a reunion movie?

How great would it be if I could spell. LOL

How greate would it be to see a major issue in Disher’s new town and teh cast assemble to help him combat the problem.

i cant be anymore honest when i said that the monk series finale is the best series finale in history. however it felt like there needed to be something more. something was missing and i cant quite put my finger on it. if i were to be making a monk the movie i would go with something like… where molly becomes interested in what monk does and goes to solve a huge murder mystery . that would be a quick guess, but i am sure the writters of monk would come up with something better.

I would love to see a yearly movie of Monk. They did this with Murder She Wrote for awhile and it seemed to go over well.

I think a Monk movie would be great. I think a great idea for a movie, that would be a continuation of the series would be, Dale the Whale is murdered and in prison and Monk investigates. There should also be something tied into Trudy’s case, like if there were another loose end. Why did she ever say “bread and butter”?

One thing that puzzled me about the ending, is that there was no mention of the man with the 6 fingers, I may have got something wrong, but the judge didn’t have six fingers, nor did the assassin he contracted. It was also obvious that Monk had started to change a little once he’d had closure with Trudy’s case, changing his dressing style and loosening up a bit. I think just knowing how his personality will develop and whether it would affect the way he works is going to be interesting. I would also love to know whether he would… Read more »

What about the truth behind Mitch’s death? Maybe Monk can find some way to prove if he ran off after the crash or not. (The story Natalie told Monk in Mr. Monk and the Electon I believe)

BENJI!!! Benji should show up with Sharona at the crime scene while trying to solve the case and notice something Monk missed, then he’ll get dirt on him or something and Julie will give him a wipe! Nothing really has to happen, i just think it would be awesome to hint at it maybe as a little joke.

I don’t think Molly should die. Maybe if there were a serial killer on the loose and Dale the Whale used that as a front to kidnap Molly and stage her death but Monk realizes it wasn’t the same guy. Then Dale claims he has information in exchange for his release. But the guy he hired to kidnap her is actually someone Monk put away and that guy kills Dale before he can negotiate. Then they solve the case in time to save Molly and Monk kills the guy. Maybe if the guy was the guy from the first episode,… Read more »

Monk needs a girlfriend. Natalie at the moment is off the market. But what if something happened to Steven??? Or, Molly turns out NOT to be Trudy’s daughter after all? Dale the Whale issue was never resolved – I thought sure he’d turn up dead or be involved somehow in the last episode. How about if he calls Monk, tells him he knows a secret about Molly, and then dies before Monk can talk to him? Then Monk would have to solve the mystery, with the help of his friends… and Randy and Sharona return to help out.

I think that Molly should be murdered, and Monk has to solve the case, but I also think that Sharona should be involved, but sadly i don’t think the randy thing is going to happen, he left San Francisco in the Finale, but then again Bitty left in season 3.

I would love to see Monk and Natalie married. Also Molly turns out to be a fraud and Mr. Monk goes off again and bak to Dr. Bell. Bring Disher back and more,more,more of Natalie !!!!!!!!!

I believe it would be awesome.

Certainly the threat to Molly idea is a good one. Also a trip to Summit, NJ to see Randy and become involved in a case. Closure on Dale the Whale also would also be a possibility. Julie needing hope at college with a room mates disappearance might have traction.

I would love to see a reunion movie, I love Monk. I love the actress who plays Molly so I would love something that revolved around her to be Monks next big case to solve. Bitty also has to be involved and all the normal Monk crew especially the Captain, Natalie and Disher. Great show, Tony is a genius.

Gee, Its sad to see end monk end especially when the show has
such great ratings.
I would like to see a reunion