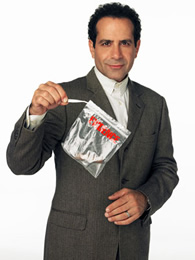 Good news and bad news for fans of USA’s Monk TV show. The network has renewed it for an eight season but has also announced that there won’t be a ninth year of dysfunctional sleuthing.

Monk tells the tale of Adrian Monk (Tony Shalhoub), a brilliant San Francisco detective who, after the death of his wife in a car bombing, has a nervous breakdown. After being a recluse for three years, Monk returns to the force, barely able to control his obsessive-compulsive disorder. Monk’s many phobias make it difficult for him to function but, because he’s hyper-aware of the world around him, he’s an incredibly observant sleuth.

The TV show debuted on July 12, 2002 on the USA network. The show began as a modest success and grew its audience to an average of 6.1 million viewers in season six. This year’s episodes have been averaging five million viewers, 40% of which are from the desirable 18-49 demographic. The numbers are even more impressive when you consider that the series airs on Friday nights, a little-watched night of television.

USA has renewed the series for an eighth season of 16 episodes but those will end the series. With the show’s viewership still growing, why finish it now? The decision to end the series is said to be a mutual one between all parties involved. Though they maintain that they want to end Monk while the show is still on top creatively, the reason for the cancellation comes down to dollars and cents. As the seasons have progressed, production costs have increased and the network likely finds it hard to justify episodes’ high pricetags.

USA’s Executive VP of Original Programming, Jeff Wachtel, assures that viewers won’t be disappointed by the final episodes. In a statement, he said, “Our fans have been extremely dedicated, and season eight should prove to be a very satisfying reward.” It’s rumored that the final episodes will bring the character full circle, centering around the killer of Monk’s beloved wife.

A special holiday episode of Monk is slated for November 28th and season seven episodes will continue in January 2009. Monk’s last 16 episodes are scheduled to begin airing sometime next summer. Stay tuned!

saw last of the series this evening, although it was fantastic I am devastated that Monk has ended, please please make a season special.

why did you guys end the best show in history the show will surely be missed please conitue the show for 5 MORE YEARS with the same cast as 2009 PLEASEEEEEEEEE?

i cant belive it’s over … monk was part of my life and still it is … PLEASE SOMEBYDS TELL ME … IS THERE ANY CHANCE TO BE 9th season . i’m sad really …

This is by far the best show i have ever seen i have watched ever single episode in 3 days via netflix. I have never seen a better show and probably never will. I cannot believe its all over. Im sooooo addicted its pathetic. This really sucks r.i.p the best show that was ever made. If it ever comes back i dont know what i would do. That would just be amazing!

I’ve been watching most of the episodes via netflix as well. I didn’t find out about the TV show until this year. I had checked out a monk book from my school library. I didn’t even know it was a show until a friend told me. I think the books are just as good as the shows. I have seven books. I’m officially addicted. I’ve gotten my whole family monked. I’m almost finished with the last season and won’t know what to do with my self when it’s over.

I hear Monk is coming back soon Plzzzz respond with the info on if this is true???? If so when will it be back on???? & the T.V channel it will be on???….everybody I knw Love Monk my friends & I would get 2gether & watch it every week when it was running….Plz respond to this plz….It’s driving us crazy.

Please bring Monk back as TV movie or two , it has been done very well with Colombo and a host of other tv series , we still lucky that we still get old episodes of Monk on TV in South Africa I hope that the creators and producers Andy Breckman and Tony Shalhoub are reading this and start doing something about it as i am sure they can see that there is some loyals fans all around the world waiting for more Monk

Please Please Bring Monk Back , I look forward to every episode. USA has a really good formula with Monk, Psych, White Collar Keep it going, Please keep it going

Please bring Monk series back, we all miss him
We need an update of 2010, whether Monk is coming back with new episodes
or not?

I am in London UK. I am utterly addicted to watching Adrian Monk.And so sad its soon to end. We get to see snippets here and there here,at awkward times mid afternoon midweek – please please Adrian and Sherona and Nathalie and all the cast, please dont go!!! When will we get to see Monk catch the killer of his wife???? Its not fair, please make a deal with BBC. thanks. Annie

To the Producers, Writers, & Actors of the Series, “Monk”. Please reconsider bringing “Monk” back to USA, & to all of your adoring Fans! This brilliant Show could have run for 10 more years, & still be a first rated series! KUDOS, & CHEERS TO THE BEST WRITERS, & ACTORS, EVER!!

I MADE FRIDAY NIGHTS ‘where I live’..MONK night…I cannot believe the TV stations and producers would end such a GREAT SHOW. Well,I am very sure that they cannot replace it !! And we will be watching OTHER TV STATIONS !!

What a ride. The best show ever! Couldn’t have ended any other way. Thank you!

To the Cast of Monk. I didn’t start watching the show until the last 3 years of it.I then started watching it incessively.I wish I had started it from the beginning.I am sure going to miss the new episodes. I have since I started watching got caught up on all the back episodes.Good luck and hope someday there is a reunion episode.

You will be missed.

I’ve greatly enjoyed the Monk series; quality show in every respect. The last show was no exception, in fact, it was perhaps the best ending to any series I’ve watched, which further attests to the quality of not only the actors, but also the writers and everyone involved in the series. I will definitely miss the show! Sorry to see you go!!