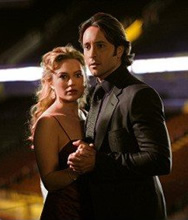 CW you are our only chance save Moonlight for us! Also you would have lotsof viewers because Moonlight is super popular! If you don’t take Moonlight that would be the dumbest move you ever done!

I am hoping that moonlight return to t.v. It was a wonderful show, and i am missing it very much. T.v. doesnot have much to offer, but this was a snow I really enjoyed watching. I am hoping and awaiting its return.

Also, I loved the cast; they are so very talented. I request to bring back the show some way some how.

Please tell me this isn’t happening…… Finally after the bloody Strike my hottie vamp came back and now it’s canceled! So irritating all the show’s I love fail on cbs… I am starting to hate that channel And Cane 2 loved that one .. well what can u do….. I hope they give some thought about Moonlight again… Very sad…..

Hello I have recently heard that you are canceling the show moonlight I very much love this show and it has truly great acting and an amazing show over all .I think that this is the best show I?ve ever seen or been able to enjoy. And I beg you to take that show off the cancellation list.

Thank you for listening to me,
Kelly McKinney

Oh yeah and I really like who Mick is right now 🙂 He is part of what makes the show!

I really do not want this show cancelled, it had a great first season and it will have a great second season, if allowed! PLEASE do not cancel! Or at least switch to CW!!!!

Reader
sue in the UK

SAVE THIS WONDERFUL PROGRAMME PLEASE SUE IN THE UK + MILLIONS MORE!!!!!!!!

humhum,
i think that moonlight is an amazing show. i watch it every week since the season started. i hope there is a season to and CBS are morons for not keeping it. im praying that CW takes over the show. others help me out on this

i love this show i wish they keep the show going

Unfortunately Moonlight would not be Moonlight without Alex, Sophia, and Jason, but thousands and thousands of fans are fighting for its return on another network. The three on this show are dynamite together which I am sure is thanks to the writers as well as the incredible actors. I would watch any of them in another show, but losing Mick, Beth, and Josef, they would never be the same again.

If Alex doesn’t want to do Moonlight it’s over for me with the show. I will follow Alex where ever he goes. Moonlight won’t be the same with out the entire cast…Alex, Sophia, Jason. It’s the chemistry between them that works. Alex is great in anything he does and no matter what it is I will follow. I won’t follow Moonlight however, without him. He is the only Mick, Sophia is the only Beth and Jason is the only Josef. I think I can speak for many if not all Moonlight fans that Alex, Sophia and Jason are so impressed… Read more »

I have to ask, woud Alex still be in high demand if he were the reason for the show not being picked up and the fans found out about it? I hate to be cynical, and I do like Alex (of course I do). But its Mick that I have fallen for. I’ve seen Alex in other things and while he’s done a great job (his Will Bryant was AWESOME) they just haven’t had quite the same appeal.

Alex if u see this. I Love you so much. And I would liek to be your freshie anytime. ***

i heard that his contract is w cbs. besides, if they want to pay him less, wouldn’t they need a new contract?

Isn’t Alex under contract with WB? I’m not sure he would have a choice.